“Hey kid, you want the author to sign that book for you?”

It was around 1978 and the man who ran the stationery story by my grandparent’s house knew the author of the horror paperback I’d plucked from the wire rack. Now, grandma had no idea it was a horror book, which is why she’d agreed to buy it. It turned out that the author lived around the corner. The man at the counter knew him well. He called him and said there was a young fan who was dying for his autograph.

The author said he’d be there in ten minutes. Grandma and I waited twenty. We had to get back, but I said I’d return an hour later, hoping he showed up. When I went back, no dice. In fact, I bounced between the store and grandma’s house the entire afternoon, forced to stay home by nightfall, depressed that I didn’t get a chance to meet someone famous.

Now, I can’t remember who the author was, but I can tell you he never became a household name. Maybe in his household. Maybe not. But to young Hunter, he was larger than life. I may have been strange (and I’m still strange), but I equated writers with movie stars and athletes. They were people imbued with rare talent. Maybe someday, I could be a writer, or the next Pete Rose, or star opposite Roy Schieder.

I’ve never forgotten that day, which is why I answer every email and sign every book that comes my way. I now know that being a writer isn’t as glamorous as I imagined, but it is pretty damn special.

The big question has always been, how can I work on a book along with my readers and collaborate on something unique and special? It would be that rare labor of love between artist and those who devour his art.

And then it hit me like a giant squatch foot to the side of my noggin. 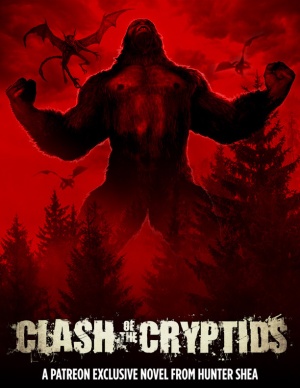 Enter CLASH OF THE CRYPTIDS!

Bigfoot battling Chupacabras to the death! The Jersey Devil squaring off in an aerial fight with Thunderbirds! Mongolian Death Worms rising from the earth to swallow up Mothman! Dover Demons running rampant! Loch Ness Monsters bursting from the loch to devour villages! The world is overrun with monsters, and only a select few can stop the madness.

Imagine all of that and so much more. CLASH OF THE CRYPTIDS is a choose your adventure monthly serial, exclusively for Patreon members. For just $1 a month, you can read the story and vote on where the next chapter takes the insane tale.

That’s less than the cost of a cup of Chupacabra latte. YOU can be in the story. YOU can determine all of the twists and turns. YOU tell me what monsters to include. Together, WE will make horror history.

So come on, let’s go monster hunting! Click here to join CLASH OF THE CRYPTIDS.