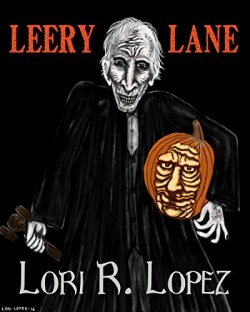 Sometimes a review is hard to write and this is one of them. I’ve read stories from Lori Lopez that I enjoyed but this book missed the mark for me. There is a lot going on in Leery Lane and I enjoyed the Gothic horror aspect but I couldn’t get a good grip on where things were going here. The story felt fragmented and disjointed with Frieda’s random encounters. The constant back and forth from present to past didn’t work for me. As she wondered down Leery Lane looking for what she lost she talked to dead people and each conversation was like a riddle. It felt like she would never get the answer she was looking for and this really slowed the flow. I enjoyed when Frieda finally learned why she hadn’t talked with her sister and more so when finally found the lost item. I just wanted to get to this point sooner and struggled with getting there.

Have you ever kept a secret from even yourself? On one rainless electric night, Frieda Noff will learn the truth about her past, her relationship with her sister, and her hometown’s darkest secrets. It is All Hallows again, twenty years after she went down that fateful gauntlet of haunted houses as a Trick-Or-Treater. She’s finally back, perhaps to stay this time.

A young woman is confronted by the ghosts of her demons when she must return to Leery Lane, the dead-end where she lost an important piece in the puzzle of her past. She and her sibling haven’t spoken in two decades, since that terrible Halloween when Frieda borrowed something that belonged to Francine without permission. She feels that she needs to remember what it was and find the object of contention, somewhere in a row of decrepit Victorians, to repair the rift between sisters. But some secrets are better left buried. A witty blend of Gothic Horror, Humor, Supernatural and Mystery, Leery Lane is a ghost story to curl up with and savor. Take a walk you won’t be able to forget on the creepy side of town. 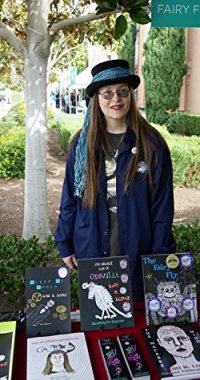 Lori R. Lopez wears many hats as an award-winning author and poet of Horror, Speculative and Literary Fiction, Fantasy and more. She is also an artist, musician, songwriter, actress, filmmaker, tree-hugger, vegan, and animal-lover. A member of the Horror Writers Association, Lori roamed graveyards as a kid and conducted funerals for dead birds, squirrels, insects and spiders. Her offbeat books include THE DARK MISTER SNARK, THE STRANGE TAIL OF ODDZILLA, LEERY LANE, ODDS AND ENDS: A DARK COLLECTION, CHOCOLATE-COVERED EYES, THE MACABRE MIND OF LORI R. LOPEZ, THE FAIRY FLY, AN ILL WIND BLOWS, DANCE OF THE CHUPACABRAS, and POETIC REFLECTIONS I and II (a series).

Stories and verse have appeared on Hellnotes, Servante Of Darkness, and Halloween Forevermore; in WEIRDBOOK, THE HORROR ZINE, THE SIRENS CALL, BEWILDERING STORIES, and anthologies such as CALIFORNIA SCREAMIN’, JOURNALS OF HORROR: FOUND FICTION, DEAD HARVEST, FEARFUL FATHOMS: COLLECTED TALES OF AQUATIC TERROR VOLUME I, HWA POETRY SHOWCASE VOLUMES II and III, TERROR TRAIN I and II, GREY MATTER MONSTERS: TAKERS OF SOULS, TOYS IN THE ATTIC: A COLLECTION OF EVIL PLAYTHINGS, CURSED CURIOSITIES, CELLAR DOOR III: ANIMALS (Editor’s Choice Award winner), UNDEAD LEGACY, BONES II, GHOSTS: REVENGE, MIRAGES: TALES FROM AUTHORS OF THE MACABRE, DARLINGS OF DECAY, and MASTERS OF HORROR: DAMNED IF YOU DON’T. Fifteen of Lori’s poems were published for an anthology titled IN DARKNESS WE PLAY.

To learn more, visit fairyflyentertainment.com, a website Lori shares with her two talented sons. You can view author readings and other videos at the Fairy Fly Entertainment YouTube channel