2016 has been a strange year, both rough and rewarding by turns. I am pleased to announce that my second release, a short-story collection called Three Shots and a Chaser, is now available in both digital AND print editions!

If you’ve read my first work, Consequences, you experienced brutal, bloody horror in the style of the old slasher movies from the eighties, only told in my own way. But that’s not all there is to me; this collection demonstrates that quite clearly.

Here, you’re going to find a more subtle horror than I did before, horror not only of sight and sound, but of mind. And if you heard Rod Serling say that line, well, you’re on the right track. See, this time, it’s not Jason or Freddy or Michael or Pinhead that influenced me. Instead, it’s a Twilight Zone, reaching for The Outer Limits, and telling a few Tales from the Darkside.

While the stories here are still based in horror, there’s more than just horror, too. There’s a bit of a sci-fi bent, a little fantasy. Add a hint of the supernatural, and a dash of my normal dark humor, and you’ve got some idea of what you’re in for. There’s even a bit of that old-school anthology feel, where there’s a story around the stories, too. For that idea, though, I have to credit Patrick Rothfuss and the Kingkiller Chronicle for showing how it can be used this way.

Basically, this is something different, something to show I am more than a one-trick pony. And honestly, while I’m a bit nervous about trying something so vastly different from what I’ve done before, I’m also excited as all get-out for everyone to read these tales! 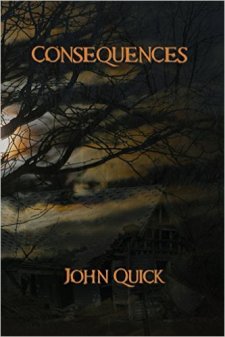 I’m celebrating, but it’s YOU who gets the reward! In honor of this collection’s release, not only is Consequences going on sale, but I’ll be giving a copy to one lucky person! So take the chance; if you haven’t read it already, here’s your opportunity to do so. I suggest you read it alongside Three Shots and a Chaser, see for yourself the range of my creative insanity. I’m curious which one you prefer: fast and bloody, or subtle scares!

Either way, if you enjoy yourself, if you lose an afternoon or two in the worlds I’ve created, then my mission is accomplished. Just don’t lose yourself too much… you’ll want to be around for what comes next!

Enter the GIVEAWAY for a Print Copy of Consequences! http://www.rafflecopter.com/rafl/display/231aa30b33/?

You can purchase CONSEQUENCES at https://www.amazon.com/dp/B01E6B9ZV8

Three Shots and a Chaser, Synopsis

A man who drives the back roads looking for something interesting finds more than he bargained for….

A woman with a very special gift for her husband on their wedding day….

A couple headed for the beach who find themselves tasked with a responsibility they never anticipated….

These are the tales told by the patrons of the Last Hope Bar, a way for them to pass the time while waiting for another new face, someone looking for a drink, or a place to wait out a storm, or just someone unlucky enough to be in the wrong place at the wrong time.

Step right on in, have a seat at the bar, and order up THREE SHOTS AND A CHASER.

You can purchase THREE SHOTS AND A CHASER at https://www.amazon.com/dp/B01M2ZITNS

John Quick has been reading and writing scary and disturbing stuff for as long as he can remember, and has only recently begun releasing some of his creations upon the world. He is the author of the novel Consequences and theshort story collection Three Shots and a Chaser. His work has also appeared in the Full Moon Slaughter anthology from JEA Press. His second novel, The Journal of Jeremy Todd is due for release from Sinister Grin Press in the summer of 2017.He lives in Middle Tennessee with his wife, two kids, and four dogs that think they’re kids. When he’s not hard at work on his next novel, you can find him online at www.johnquickfiction.com, Facebook at johnquickbooks, Twitter @johndquick, and Instagram at johndquick.