The Maid of Sker

All the best ghost stories have a grain of truth in them. Sometimes, maybe even more than a grain. And everyone loves a good, tragic love story, right? Well, they don’t come much more tragic than the tale of poor Elizabeth Williams, the original Maid of Sker.

I first became aware of her story when I read about it in a book I picked up in a gift shop in the seaside town of Porthcawl on the Welsh coast. It has long been an integral part of local folklore, though little known on a wider scale. How much of it is true and how much is fanciful hearsay, we will never know, but historical records show that the central characters certainly did exist. I always wanted to somehow incorporate the tale into a novel and finally succeeded this year with Sker House, a contemporary ghost story with a distinctly Welsh flavour.

In the 18th century, Sker House, an actual property situated in Kenfig, South Wales, fell into the possession of its most famous landlord, Isaac Williams (1727 – 1766). His daughter, the young and beautiful Elizabeth, fell madly in love with a local harpist called Thomas Evans. However, Isaac, who by all accounts ruled both his estate and his family with an iron fist, sternly forbade the prospective match and imprisoned his daughter in a room in the house until she reluctantly agreed to marry a wealthy local man by the name of Thomas Kirkhouse instead. It was marriage of convenience, not unusual in Wales at the time, with both families standing to benefit financially from the union. However, even after her sham marriage, Elizabeth still pined for Thomas, so much so that she eventually fell ill and died in 1776 at a tragically young age after just nine years of marriage. Some versions of the story claim that she died of a broken heart, others that she starved herself to death.

Whatever the circumstances of her untimely demise, it is said that Elizabeth’s ghost could often be seen gazing forlornly out of an upstairs window at Sker House, still waiting in vain for her one true love. For a time, the sightings were so frequent that many locals refused to believe that Elizabeth was even dead. For his part, the spurned Thomas Evans is credited with writing a folk song in her honour called Y Perch or Sker, which he performed until his own death many years later.

The story was later immortalized in some fashion by the well-known Victorian novelist RD Blackmore (1825 – 1900) who spent much of his childhood in the nearby village of Nottage and later wrote novel called The Maid of Sker. However, the story he wrote bares little resemblance to the popular romantic myth and unfortunately, there are no ghosts in it.

There are in mine. 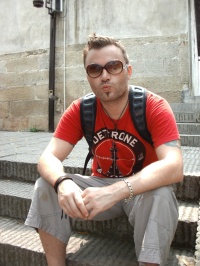 Proud Welshman C.M. Saunders began writing in 1997, his early fiction appearing in several small-press titles. Following the publication of his first book, Into the Dragon’s Lair – A Supernatural History of Wales (2003), he worked extensively in the freelance market, contributing to over 50 international publications. In addition he has authored a succession of novellas and had over thirty short stories published in various magazines, ezines and anthologies. He taught English and creative writing in China for five years before settling in London where he works as a writer and editor in the sport, fitness and men’s lifestyle sectors. He is represented by Media Bitch literary agency, and his latest book is called Sker House.