Review copy provided as part of The Monster Underneath blog tour.

Max Crawford doesn’t just have one gift, he has two. He can read your thoughts and get into your dreams.  Max works as a prison therapist at the Texas State Penitentiary. His job is a secret program intended to help facilitate the rehabilitation of the inmates. He conducts his special brand of rehab in the inmate’s dreams, a method that Max has found to be quite effective. The FBI thinks he can work wonders and they have a special assignment in mind for Max. FBI specialist Linden needs Max to getting vital information about a serial killer who is suspected to have killed again. William Knox has been accused of killing three women and nearly killing a fourth. Linden wants Max to get Knox to confess, not an easy job when no one can know about what he is doing. Locked in solitary confinement Max must find away to jump into Knox’s head. This isn’t going to be as easy as Linden thinks it will be and Max is about to go on the adventure of his life.

Max befriends Knox in his dreams and we are given a disturbing glimpses inside the dreams of a serial killer. The dreams start off scattered and disconnected in many ways. Max isn’t sure he can get the proof he needs to prove Know is guilty. But soon the time in the dream world begin to reveal that Knox isn’t as innocent as he proclaims. Knox takes Max through his dream life and reveals the monster that he truly is, the monster Linden is convinced he is. Matthew Franks had me floating through the dreams with Max, the rules he establishes in reading minds and jumping into dreams was well thought out. I found myself totally believing that Max could enter dreams. Knox was a disturbing character, out of his right mind with the psychosis of a killer. He is the kind of guy you would do a double take if you saw him. His psychopathic nature felt like someone I had seen on any number of true crime shows. Calm, collected and confident on the outside, twisted, damaged and calculating on the inside.

This was a story I really dug, it as a fun trip in and out of dream land of Knox. Matthew Franks really has an excellent grasp on the way a psychopath acts, it was chilling to say the least. The Monster Underneath had me thinking of the movie Inception as Max traveled deeper into the dream world. I started to wonder if Max would make it out and if he would know what was real and what was a dream. Heck of a story Matthew, well done. I very much enjoyed reading your book and I’ll be looking forward to reading your work again, hopefully sooner than later. 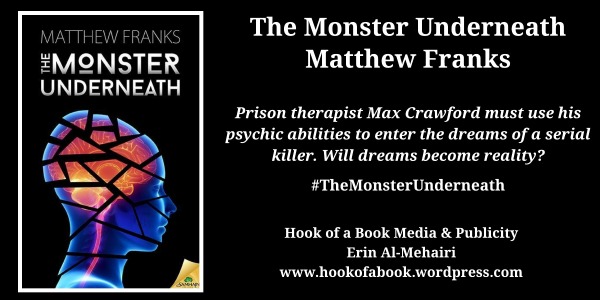 Reality can be the difference between a dream and a nightmare…

Max Crawford isn’t a typical prison therapist. He uses his unusual psychic ability to walk with convicts through their dreams, reliving their unspeakable crimes alongside them to show them the error of their ways.

Max always has to be on his toes to keep himself grounded, but the FBI agent waiting for him in his private office immediately puts him on edge. The bureau wants Max to go way outside his comfort zone to enter the dreams of suspected serial killer William Knox.

To get a confession and secure the future of his prison program, Max must gain Knox’s trust by any means necessary—and survive the minefield of secrets waiting inside a murderer’s mind. Secrets that could turn Max’s reality into a living nightmare.

“An assured, gripping, totally engaging debut, Matthew Franks will have you burning through the pages of this taut supernatural thriller at breakneck speed. If Christopher Nolan and Stephen King ever teamed up to write a novel, this would be it. Highly recommended!”
–Ronald Malfi, author of Little Girls

“What if you could see inside the dreams of anyone you came in contact with? Would you dare to look? Could you handle the things you’d find within? The Monster Underneath is a real nail-biter – one of those ever-spiraling stories that you just can’t put down until you reach the surprising end!”
–John Everson, Bram Stoker Award-winning author of Covenant and The Family Tree

“The Monster Underneath is an intense and clever debut in which reality is more terrifying than the nightmares and twisted dreamscapes of a madman. Author Matthew Franks is a name to remember, his stories you won’t soon forget.”
–Rena Mason, Bram Stoker Award-winning author of The Evolutionist and East End Girls

“Matthew Franks’ debut novel takes you through the darkest, twisted alleys of a killer’s mind and then drags you several steps further, beyond the status of observer and into the disturbing realm of accomplice. A harrowing tale of murder and delusion and moral ambiguity.”
–Hank Schwaeble, Bram Stoker Award-winning author of Damnable, Diabolical, and the dark thriller collection, American Nocturne

Matthew Franks lives in Arlington, Texas with his beautiful wife and children. He studied
psychology and creative writing at Louisiana State University then obtained a Master’s Degree in counseling from Texas State University. When he’s not working on his next story, he’s counseling adolescents or trying to keep up with his three highly energetic daughters. You can connect with Matthew at: authormatthewfranks.com.

If you would like a copy of the book for review or to conduct an interview with Matthew Franks, please contact Erin Al-Mehairi, Publicist, at Hook of a Book Media: hookofabook@hotmail.com