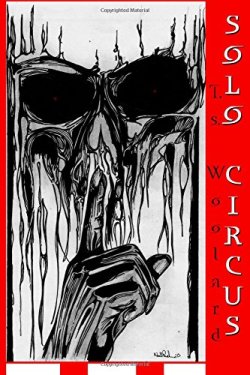 “From the Southern Tale Spinner, T.S. Woolard, comes 15 Creepy Tales of Horror and Dark Transgressive Fiction unlike anything you’ve ever lived through before. There are stories where clearly someone is stark raving mad—and before you’re through—it may well be you. Open the door and step into Woolard’s World—if you dare.—Dona Fox, award-winning author or “Taking Ink.”

When ever I read a book by an author that’s new to me I’m always excited to see what they have in store.  Whether it’s a set of short stories or a novel I go in with an open mind.  In the case of Solo Circus by TS Woolard I was happy to have discovered his ability to terrify me, which isn’t always easy.  Solo Circus from TS Woolard is a very different collection of short stories. The range and view into the terrifying world is unlike any in recent memory.

“The Savior” This is a hell of a story and it all finally clicked for me near the end.  A man who is helpless to protect his “children” and a group of men torture them day after day, week after week.  In the end I finally understood why the man was helpless and the whole story fell in to place.  Cleverly written and interesting in the view-point it’s written from, T.S. Woolard painted a great scene in this story and looking back at it I enjoy it more and more.  This piece of writing is one that sneaks up on you and left me wondering what took me so long to figure it all out.  “Torn Apart” is unsettling at the very least, a women looses her mind from the events of her inability to conceive.  Then her subsequent divorce, husbands new marriage and the straw that tears her apart is her ex-husband’s newborn.  This is a very short story but the length doesn’t detract from the well constructed tale told here.  “Deadly Death, U.S.A.” a story set in the old wild west about a town named Death and a Sheriff tasked with solving a set of murders.

“The End” is my kind of story, Apocalypse, the end of the world.  It’s maybe the shortest story T.S. Woolard has in this book and I loved it from start to finish, I only wish it was longer.  This is a fast-moving story and has a great premise.  Our character predicts that his friend will have his book published about the end of the world just before it arrives.  T.S if you are reading this review consider expanding this one, it would be awesome at 5,000 words or so.  “Baylor’s Burden” is one of my favorite stories in this collection.  Baylor is on a train ride with a few others in his car, and soon his burden becomes apparent.  Each of the riders on this train have a past to answer for and consequences to reconcile.  As the story unfolds Baylor has his time come and is spared the fate of his fellow travelers, but he doesn’t get off scott free from his past.  His journey continues on even after arriving at the train station and his consequence is more than fair.  “Ashes to Ashes” is a really fun look at death and how much power a persons spirit can have even after passing on.  I like the way the story is told with emotion, a bit of supernatural and of course horror.  A man’s fathers ashes are temporarily lost causing mayhem until his final wish is met.  That final wish was to be with his wife after passing, and then his spirit could finally rest.

“The Poet” is about a mental patient who is a poet and a mysterious death in the mental physicality where he is kept.  An inspector is sent to solve the case and finds more than expected.  The Poet is well written and feels a bit crazy which adds a nice feel to the tale.  In the end I felt like I had spent a night there myself.  “Non-Compliant” is a really great story of paranoia, conspiracy and cover up.  After Jacob’s mother dies he learns the truth about his mother and a larger truth he wasn’t prepared for.  Great writing mixed with well know conspiracies and medical illnesses make for a fast paced read.  This is my kind of story and the author does a fine job with it all.  “Plant the Seeds of Doubt” What a great read about a man who has lost his son and is overtaken by grief.  I love the story being told with the flashbacks to the events that lead to the current events in the characters life.  Planting the seeds of doubt is really about losing one’s sanity and is always a great topic for a horror story.

“Sleep Apnea” is a true and true nightmare tale and with vivid descriptions of the dark basement it takes me back to the move nightmare on elm street.  This story just like that movie gave me chills and makes me want to stay away from the basement for a good long while.  And now I’m sure my nightmares will have newly added fear and dread thanks to T.S. Woolard.  “Sinful Santa & the Demonic Deer” This is the most twisted tale in Solo Circus and is a great demonstration of the wide array of talent of T.S. Woolard.  Santa and his Reindeer are demons in disguise and reek havoc on a Holiday that should be nothing but wonderful.  I was really taken back by this story, I didn’t expect this kind of crazy town horror, I should have known better when the book is titled Solo Circus.  “Before Hell” regardless of my previous comments on these short stories this has taken horror and twistedness to a whole new level.  T.S Woolard has shocked me with this fine story of a psychopath.  The descriptions of torture and death are vivid and now burned in my mind’s eye.

“Dear Mr. Burton” is by far the best story I have read in this collection.  A story about a serial killer who writes “letters” to Mr. Burton who he gives updates about his latest kill and plans for his next kill.  I love the format of storytelling through these “letters” to Mr. Burton signed “The Killer”.  This story is on par with some of the best horror writing I’ve read, and T.S. Woolard has crafted one hell of a great story with this tale of cat and mouse.  I won’t spoil it, but I will say the twist is fantastic and I have to admit I never saw it coming!  I love when a writer is able to keep enough hidden in plain site until they are ready for the reader to put the pieces together.  “High & Low” A story with a lesson to be learned about a couple who get high and discovers the lows that come with it.  The story is wrapped with religion, God and the Devil all of which aren’t my thing so I can’t say I loved it but it was a well told story none the less.  “Ashley” gives a new meaning to “Mama’s Boy” and is emotionally written and reminds me of stories by another author I love to read, John F.D. Taff aka “The King of Pain”.  T.S. Woolard draws on his dark side for this tale and with his added use of dolls, which I find creepy as hell, he really had me horrified as I read this short.  Ashley was a fast paced read right from the first sentence and had me thinking “what the hell” is going on, and what was going on was far crazier than I was expecting.

All in all I very much enjoyed Solo Circus and would recommend it to any horror fan, especially those of us who like a twisted story or two thrown in for good measure.  Many thanks to the author for giving me a copy to read and review.  I’ve read only a few of T.S. Woolard’s stories before diving head first in to Solo Circus and these are some of his finest stories waiting for you to read.  Many will give you a shock and a good scare or even make you cringe.