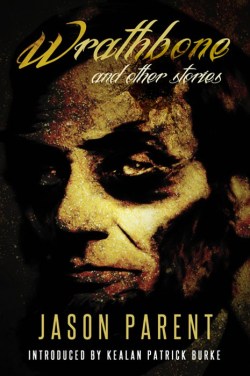 Review copy provided as part of the Wrathbone and Other Stories blog tour.

Wrathbone and other stories is a quick and engaging read. The title story is very well written and I really enjoyed where the story took me. Was it a slow slide into madness for General Henry Wrathbone or was madness there all along waiting for him? Henry was a close friend of President Lincoln and by his side when he was killed. Lincoln’s death weighed heavily on Henry and only helped his slide into madness. The way Jason Parent describes Henry’s struggle with sanity while on the edge of paranoia is done with finesse. Henry is constantly pushing the thoughts of his wife leaving him from his mind. After his failure to react at just the right moment to Lincoln’s death it adds just enough to tip the scales. Madness had its fingers firmly around Henry’s mind and he couldn’t escape. This is one of my favorite stories from the author yet.

In The only Good Lawyer Bradley Walsh, a slick lawyer, with a massive ego looks at his counterparts as inferior. In reality he thinks of everyone this way. Clint Billings, his client, is the worst of the worst. He is accused of murdering a girl and Bradley knows he’s guilty, not that it matters because he doesn’t care. The brief description of the victim’s father is enough to give me the willies! He has blank eyes with milky fog in them, that’s enough to make me looks the other way. The trial takes a wicked turn for Bradley as the rug is pulled out from him. The victim’s father has a voodoo doll and as I usually say, bad news for that guy! The story is a straight forward horror story, but seeing where it may leads doesn’t make it any less enjoyable. Justice is served and Bradley is given a fitting ending. I really loved how easily it was to hate a character in so few pages.

For the Birds was… well, what the hell do I say about this very short and crazy story. First, I’ve never been a fan of birds as a pet and this story only reinforces that feeling. Nev lives alone with his pet parrot, Joli. Joli loves raw meat, the more raw the better. I can’t say any more without giving it all away, that wouldn’t be any fun! I sure as hell didn’t see this ending coming. Jason Parent, you sir, have a twisted sense of humor. You had me feeling bad for Nev, although I hardly had a chance to get to know him and he didn’t deserve what happened!

Revenge is a Dish gives us Maurice who is a great chef, at least in his mind he thinks so. After having lost his job he takes an offer to work aboard a private yacht. The owner is some rich snob, but the job has good pay and side benefits for Maurice. The extra benefits are a hot blonde that Maurice enjoys until he gets caught. The crew tosses him in the ocean and now it’s time for the fun to begin. Maurice is left to float on a small life ring. Luck was on Maurice’s side, after two days at sea, he wakes up on the shore of a beach. He sees the Wakemaster down the beach and revenge fills his thoughts. He this rich snob and crew to suffer as much as he did. This story had me guessing what would happen almost to the end. Maurice was a really great character and I thought the end was fitting for a chef of his talent. Wrathbone and other stories is by far my favorite book from Jason Parent yet. If you haven’t read his books before this is good place to start.

Terror follows those who let it into their hearts.

Guests of President Abraham Lincoln and Mary Todd Lincoln, Major Henry Rathbone and Clara Harris attend a showing of Our American Cousin at Ford’s Theatre on April 14, 1865. On that fateful night, a great man falls, but he is not alone. For Henry and Clara, the night is only the beginning of lives wrought with jealousy, madness, and horror.

The Only Good Lawyer

Bradley is a savvy defense attorney with no scruples. Under his representation, many a guilty man has gone free. But when a voodoo priest takes the stand, Bradley soon discovers that he, too, is on trial, and the punishment for guilt may be more than he could bear.

Dorian loves himself, and why wouldn’t he? Every guy wants to be him, and every girl wants to be with him. He would trade all he has to make his looks last forever, but bargaining with the devil may leave him short a soul.

Nev’s best friend is his parrot. In fact, it’s his only friend… and his only ally when his home is invaded.

Revenge is a Dish

Praise for Wrathbone and Other Stories–

“From the eerie opening tale to the grisly closer, and all of the wonderfully mean-spirited tales in-between, Wrathbone is a winner!” — Jeff Strand, author of Dead Clown Barbecue

“Wrathbone and Other Stories is a hard-hitting collection that you can completely immerse yourself in. The title story is a beautifully written period tale of love and tragedy. I finished and realized that I was breathing shallowly because I was genuinely affected that much. A tale that leaves you breathless? Yes, please!” – Mercedes M. Yardley, author of the Bram Stoker Award winner Little Dead Red.

“Jason Parent is a master of controlling how you perceive the characters and the events in these stories, making sure you read it exactly how he wants you to read it. It’s like mind control. Powerful stuff!” – Nev Murray, Confessions of A Reviewer

In his head, Jason Parent lives in many places, but in the real world, he calls New England his home. The region offers an abundance of settings for his writing and many wonderful places in which to write them. He currently resides in Southeastern Massachusetts with his cuddly corgi named Calypso.

In a prior life, Jason spent most of his time in front of a judge . . . as a civil litigator. When he finally tired of Latin phrases no one knew how to pronounce and explaining to people that real lawsuits are not started, tried and finalized within the 60-minute timeframe they see on TV (it’s harassing the witness; no one throws vicious woodland creatures at them), he traded in his cheap suits for flip flops and designer stubble. The flops got repossessed the next day, and he’s back in the legal field . . . sorta. But that’s another story.

When he’s not working, Jason likes to kayak, catch a movie, travel any place that will let him enter, and play just about any sport (except that ball tied to the pole thing where you basically just whack the ball until it twists in a knot or takes somebody’s head off – he misses the appeal). And read and write, of course. He does that too sometimes.

Please visit the author on Facebook, on Twitter, or at his website for information regarding upcoming events or releases, or if you have any questions or comments for him.

If you’d like to feature or interview Jason Parent on your site, or review Wrathbone and Other Stories, please contact Erin Al-Mehairi, Publicist, at hookofabook@hotmail.com