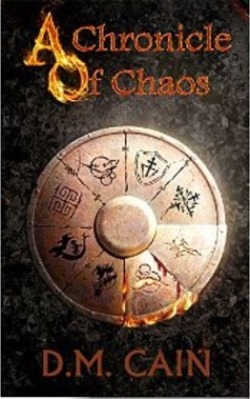 The Human Realm, demons from Hell, and angels from Heaven; The Children of Light and The Brotherhood of Shadow; The first Chronicle focuses on the character, Chaos. A Fantasy world where the classic struggle between good and evil takes on an interesting twist when a good human, Chaos, and an evil demon, Anathema, fall in love. Demons can’t feel love, they can only feel evil emotions, so what will happen when the evil demon Anathema experiences the emotion of love?

D.M. Cain has developed her own fantasy world and plans to write a series of books focusing on a different main character in each book. Humans populate her fantasy world, but they are different from the humans we know. The Human Realm is divided into two groups who battle for domination. The author has dropped the readers into her fantasy world where the conflict between the two major human groups changes when the Brotherhood of Shadow brings demons from Hell into the conflict. The demons can disguise themselves as humans and transform back and forth. The Children of Light counter with angels from heaven that can also disguise and transform.

D.M. Cain has a great imagination, and has written an outstanding first book in her Light and Shadow Chronicles Series. Her descriptions of the world and the inhabitants, including the demons and angels is very well done, and her writing style keeps the action moving at an enjoyable pace.

I strongly recommend this book to everyone who likes YA Fantasy.