The Scary Reviews is excited to announce that Mark Matthews book MILK-BLOOD is being made into a movie.  This is a great horrifying read that hits you right between the eyes.  Congratulations Mark!

MILK-BLOOD, a novel by Mark Matthews, has been optioned for a full length feature film by Monkey Knuckle Films. The option includes rights to the short story, The Damage Done, a companion piece to the novel.

“MILK-BLOOD is true reality horror, with supernatural elements that only serve to make it more believable,” explains executive producer Michael Bradford. “The story will certainly hold an audience.”

MILK-BLOOD is the story of a ten year old girl named Lilly, born with a heart defect, who lives on a Detroit street where poverty, urban despair, addiction, and both the living and the dead threaten her outside her doorstep. The author has tapped into this experience as a
social worker to create what one review site calls, “an Urban legend in the making.”  The author’s previous novel, On the Lips of Children, was a number one best-selling kindle novel on amazon. 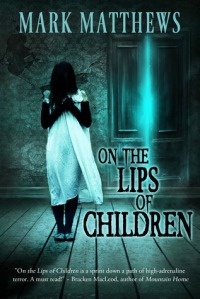 The title, “Milk-Blood,” comes from the Neil Young song, “The Needle and the Damage Done” and refers to the extensive lengths a heroin addict will go to in order to maintain their high.

Monkey Knuckle Films is a newly created LLC, but the founders have a long history of horror, and have worked with actors such as Sid Haig from The Devil’s Rejects, and much of the cast of The Evil Dead. They are currently in post-production for the horror film, “Elder Island“, set for release in 2016. MILK-BLOOD was a semi-finalist for the 2015 Best Kindle Book Awards and is available in paperback, kindle, or audiobook on amazon.

A sequel to MILK-BLOOD is scheduled for release in early 2016. “The sequel is some twisted material,” says Matthews, “but with a purpose. Horror without heart doesn’t appeal to me, and I don’t think to many readers.”
Links:

To celebrate the movie contract, the author is offering up to ten vouchers for a free kindle download on amazon. Just email your request to WickedRunPress@gmail.com