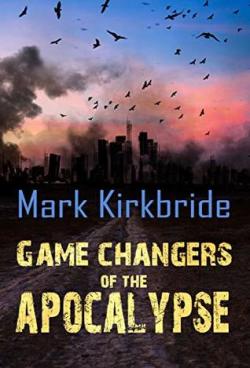 Genre: Post Apocalyptic
Length: 299 Pages
Publisher: Omnium Gatherum Media
Release date: January 7, 2019
Synopsis: It’s always the end of the world when you break up with someone. This time it really is… Everyone on the planet has mysteriously disappeared, leaving exes Greg and Polly. They’ve survived the apocalypse, yet shouldn’t have. Battling each other and a malevolent entity that teases them with their fate, how long can they remain ahead? Even more terrifying than everyone else on the planet disappearing is what’s about to take their place…

Post apocalyptic fiction is flat out one of my favorite genres. I’m always anticipating a variation to the end of the world I haven’t read before. Game Changers of the Apocalypse had an interesting premise, a fun synopsis. Unfortunately, the plot was poorly constructed and the ending was less than satisfying. There was no clear direction to the story leaving the characters to drift from one scene the next.

The book was a series of situations strung together, lacking a good connection between many of them. Many situations were a repeat of a previous where Greg and Polly are running all England and around London. Each time the characters seemed to be caught they somehow got away. I found the characters flat and Greg’s ability to figure out information a bit assumptive. I believe this story would have benefited from another round of editing. I was hoping for much more, and in the end was disappointed with the way the story came to its conclusion.

Link to purchase Game Changers of the Apocalypse

Mark Kirkbride lives in Shepperton, England. He is the author of two novels, Game Changers of the Apocalypse and Satan’s Fan Club, both published by Omnium Gatherum. His short stories can be found in Under the Bed, Sci Phi Journal, Disclaimer Magazine and Flash Fiction Magazine. His poetry has appeared in the Big Issue, the Morning Star, the Mirror and Horror Writers Association chapbooks. http://www.markkirkbride.com/