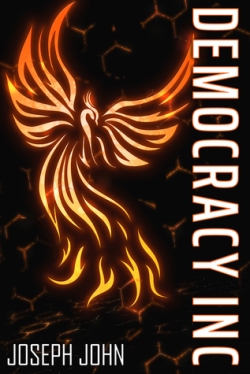 I love dystopian, cyberpunk, and sci-fi futuristic books. A world where we get flying cars, robot house keepers, or other fantastic technology like living well past our current life expectancy. The world of Democracy Inc is one of the cooler sci-fi worlds I’ve read. There are biometric sensors to keep your home safe. A system to scan your body for all diseases while you shower, what could be more convenient! Video screens on every wall to display the latest information from the news to social media. VR games as real as the physical world, and if you are ultra-rich you can live as long as you want through cloning. Plus, the first group to attempt to colonize Mars. Now if I could live long enough to see all this kick ass technology that would be great!

This all sounds fantastic until you realize all the corporations have their finger firmly pressed on the masses to control their every aspect of life, wait that sounds like now! I guess technology will always advance but not society. This is one very probable future and I loved all the cool technology. The one thing I wanted to love more were the characters, I didn’t feel as invested in them as I need to. But I did get a multilayered plot where a hacker steals a piece of data with big implications. The son of one of the big eight corporations is trying to find out why his father committed treason and what happened to the colony on Mars. With every chapter, another layer of mystery is added. If you love everything tech and futuristic then Democracy Inc. Is going to be your thing.

America as we know it is no more. Free enterprise has devolved into a world ruled by megacorporations. The ultra-rich govern from their towers in the sky while the lower class toil in the gutters just to survive. The corporate states work together to maximize profits and keep the masses placated through the Orbis, a virtual realityscape of online entertainment and the only escape from the bleak reality of existence.

Titus Remington is the son of the CEO of Roman Biogenics, but when his father is convicted of treason, a reluctant Titus finds the mantle of leadership thrust into his hands and must prepare himself to govern his corporate state. However, in his quest to uncover the truth that his father sacrificed everything for, he stumbles upon a dark conspiracy of epic proportions. Now Titus must make a choice: take the throne and wear the crown or risk the wrath of the council to fulfill his father’s legacy and set things right.

But this isn’t the land of the free and the home of the brave. This is a world without justice or hope, a world steeped in corruption and sin, where morality comes in shades of black and gray. This is Democracy Inc, where a life well led means nothing when pitted against profit margins and the bottom line, and with the odds stacked against him, Titus may very well lose everything.

I took on this mortal coil in 1976 in Omaha, NE. As an only child, my parents were able to devote their existences to catering to my every whim. My Mom started by reading the newspaper to me, ensuring I was up to speed on current events. Once I had outgrown the newspaper, she moved on to Golden Books. I read my first novel, Cujo, in the third grade. It hooked me, and I took to main-lining novels and working the libraries like an eight-year-old junky looking to score his next fix. I’ve been an avid reader ever since, throwing my lot with Frank and Joe Hardy, the three investigators, and much later, Roland Deschain and his ka-tet.

I somehow fooled Uncle Sam into believing I’d one day make a great leader of men, and he promptly shipped me off to the United States Military Academy at West Point, NY, where I languished in a turmoil of emotions that ranged from apathy to not giving a damn. This lent me to writing angst-filled poetry and short stories when I should have been paying attention in class or studying in the barracks, thereby resulting in the refinement of my craft and lending credence to that familiar idiom–you know, silver linings and all that.

In 1998, I graduated from West Point and was commissioned as a second lieutenant in Army Aviation. I attended flight school in Alabama, where I learned to wear cool shades and a leather jacket, and something about helicopters. Forgive me. It was some years ago, and my memory is fading faster than a cheap tattoo.

In 2013, I decided to hang up my cool shades and leather jacket and don a pocket protector and masking-tape-repaired glasses, transitioning from Army Aviation to Operations Research and Systems Analysis. I’d spent the last fifteen years refining my skills and building a solid foundation of knowledge, so I figured what better time than the twilight of my career to throw all that out the window and start from scratch in an entirely new field.

Now I’m serving a hardship tour of duty in Italy, where I spend my evenings sipping wine and riding in gondolas.

So how does the rest of my story go? I’ll tell you when I get there; it’s still a work in progress.