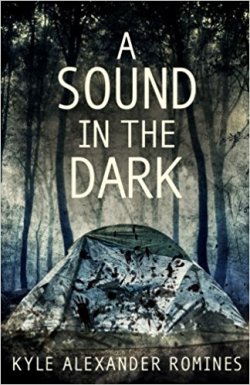 This is my second time exploring the world of Kyle Alexander Romines. I read his first novel The Keeper of the Crows a few years ago, which is a great read, and I reviewed here at The Scary Reviews. Right from the start of A Sound in the Dark I found myself hooked and interested in where this book was going. The plot was fun and intriguing and the characters were quickly introduced. I could tell the pace of the book wouldn’t slow down the momentum I was hoping to see. I loved the setting of a secluded location with a serial killer after unsuspecting campers. The location removed the ‘easy out’ of picking up a cell phone, calling for help and cutting the story short. It’s a trope I’ve seen in dozens of horror movies and it worked well in this story.

The group of characters made for an interesting mix of personalities. Our protagonist, Zack, is struggling to heal from a personal loss and now on this camping adventure he is struggling to survive a serial killer. We get a few pieces of Zack’s backstory as his character is introduced. He is joined by a few college buddies and as the story unfolds we learn the story within the story about Zack and his personal struggles. Kyle Alexander Romines keeps a steady stream of tension throughout the story. He establishes a handful of landmarks in the park that provide the reader with the feeling of a large setting. I really liked the feel this gave me while on the adventure with the characters.

What I didn’t like was when the characters are talking to a man they met by the name of Bart. He is referred to by his name, also ‘the man’ and finally, ‘the stranger’. These occur within a few pages and it gives an odd feeling to the conversation. I almost thought there was more than one character being talked about. This happened a few times when referring to certain characters and using their name and talking about them in the third person. The second dislike was the use of the moonlight, or lack of, depending on the moment. For the most part I liked the way it was used, but during a significant portion of the story a large storm was referenced which would equal clouds, rain and no visible moon.

On the plus side, A Sound in the Dark included twists and turns throughout the story. There were plenty to keep me guessing who was the killer and who would survive the night. Kyle Alexander Romines puts some nicely placed ‘gotcha’ moments in the story as we neared the climax. He also gave the antagonist a cool type of talisman, which I’ve typically seen used by protagonists. The action had me turning page after page and the ending was well put together and believable. Overall a Sound in the Dark was a fun read and one I would recommend.

To Purchase A Sound in the Dark Click Here

For Zack Allen, it was supposed to be a chance to get away and relax. A weekend camping trip with a small group of friends seemed like the perfect distraction from a messy personal life, but as Zack and his friends made their way to the camping ground at Drifter’s Folly Memorial Park, he couldn’t shake the feeling something was terribly wrong. Zack should have listened to his gut, because he and his friends aren’t the only ones in the forest. Someone else is watching—someone with dark intentions. And he wants to play a game… 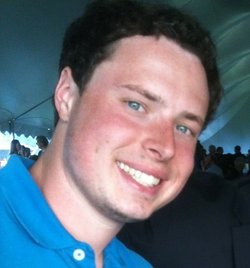 Kyle Alexander Romines is a teller of tales from the hills of Kentucky. He enjoys good reads, thunderstorms, and anything edible. His writing interests include fantasy, science fiction, horror, and western. Kyle’s lifelong love of books began with childhood bedtime stories and was fostered by his parents and teachers. He grew up reading Calvin and Hobbes, RL Stine’s Goosebumps series, and Harry Potter. His current list of favorites includes Justin Cronin’s The Passage, Red Rising by Pierce Brown, and Bone by Jeff Smith. The library is his friend. Kyle’s debut horror novel, The Keeper of the Crows, appeared on the Preliminary Ballot of the 2015 Bram Stoker Awards in the category of Superior Achievement in a First Novel. His next book, a western, is scheduled to be released in 2017 by Sunbury Press, which has also accepted the sequel to The Keeper of the Crows for publication in 2018. He is a graduate of the University of Louisville School of Medicine.