My name is Rhani D’Chae, and I am a visually disabled writer from Tacoma, WA. I’ve published two novels and a short story, and I’m currently finishing up Winter of the Drill.

I enjoy writing about Decker, the lead character in the Drill series. With 260 pounds of muscle packed onto a 6′-5″ frame, he truly is larger-than-life. After failing to save someone close to him when he was 25, he built his body into a weapon and learned how to use it. Now, 15 years later, he tries to keep his streets as clean as possible while working as muscle for hire. 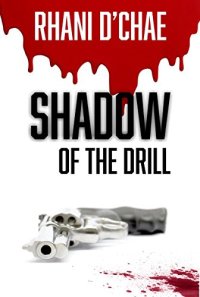 The following is an excerpt from Shadow of the Drill, after Decker had come face-to-face with the man who put him on the path to becoming the Drill. The outcome was not in Decker’s favor, resulting in our hero being tied to a chair in a burning building. I hope you enjoy this moment with Decker.

The fire was gaining ground, and he knew that time was very short. He tried to stay calm, to ignore both the heat and the ache of his burned wrists, but the horror of his predicament momentarily overwhelmed him. Panic raged and he thrashed against the ropes, losing his balance and falling face first to the ground.
But the ropes held.
The fire was close enough for Decker to feel the heat on his face no matter which way he tilted his head. His struggle had winded him, and he panted cautiously, each ragged breath searing his lungs regardless of how carefully he inhaled. He could sense death hovering, just out of sight, but he was not done yet.
He inched his way across the floor, coughing and choking from the smoke that billowed around him in suffocating clouds. Breathing was torture, but he managed to keep going, his watery eye fixed on the dirty pane of glass.
I can do this. I can make it!
However, it soon became apparent that he could not. He did not have enough freedom of movement to propel himself along the floor with the necessary speed. He was going to die, alone and most likely screaming, but even though he acknowledged that fact, he continued to fight for his life.
His fingers dug into the floor as he tried to scoot along on his back. When that failed to accomplish much, he rolled onto his side, still trying to crawl. The window was barely visible, but he was not sure if it was the smoke or his own failing eyesight that obscured it.
His pants began to smolder, and he felt panic rise again. He was not sure how easily the denim would ignite, but if it did, he would be unable to put out the flames.