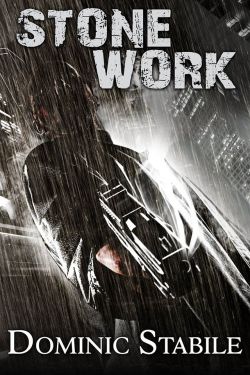 Stone is a hired hand, a mercenary, and his only concern is ‘who do I kill and how much do I get’. He couldn’t care less about the people who hire him and even less about who is target is. In the first of the three stories, Stone is on what I imagine is just another ‘day at the office’. It’s not long before things go from smooth, and “hey I just made a bunch of cash doing as little as possible” to a job from hell, literally. He is suddenly in the middle of a mess and learns that ‘performance enhancers’ have a dangerous side effect. Anyone taking the juice has to keep taking it at regular intervals. If not taken the person will become a raging flesh-eating machine with strength far beyond a regular roid head. Without giving away too much of the details, I will say I love this idea and find it completely original. I love a good drug, medication or vaccine gone wrong, there are so many directions this scenario can go.

Now Stone is stuck with a store full of monsters who need a pound of flesh. The crazy way the men have transformed as described by Dominic is unbelievable and must come from a hell of an imagination. Dominic fills in the world around our characters and it’s a future gone wrong and far from a utopia. The citizens are safely living behind a wall and kept safe from the waste land on the other side. This is another setting I love, end of the world, the breakdown of society or an apocalypse. Stone work checks all the boxes, it has a thrilling story with a pace that’s frantic and Stone is a great character.

In the second story Stone is met with crazy mutations and monsters. He’s been told of the conspiracy theories surrounding this place. Stone isn’t having any of it until he sees it for himself, and see it he does! Stone finds one of the men who was sent before him and learns the mission is a ploy. The building was built on a dimensional fault line, basically a thin spot between worlds. The idea of thin spots between worlds is a premise I’ve read before, The Mist comes to mind, and the creatures that inhabit this story are just as excellent. Dominic puts the story together in quick measure, building an excellent mystery with high tension while racing towards the finish. The story concludes with a great ending and twist that iss fun.

Godless City is Stone’s last adventure and his job is no less risky. A guy named Keagan wants to hire Stone and tells him he has proof that the gods they worship are not gods at all, at least not in the traditional sense. In this future world what people considered a god is funny and an interesting comment on our current society. Keagan has stolen a book from the mayor, a book that has all the proof he needs to convince anyone the gods are not real. Again, Stone’s job is never as simple as it should be. The technology in Stone work is fun and just plain cool. This is why I love sci-fi and wish I read it more. Godless City feels like I was dropped off in the world of Blade Runner. The darkness and futuristic feel are so visible from the great way Dominic describes the scenes. This is one of my favorite books this year, easily on my top 10 list. Stone is a great character with a wicked sense of humor, I hope he surfaces in another book!

City stands in the irradiated dunes of America, nearly two centuries after the Final War. The wall surrounding it is a buffer for the wasteland inhabitants who covet entrance, and a trap for the citizens smothering in its polluted air and drowning in its blood-filled streets.

Stone is a criminal for hire. Robbed of his loved ones and scarred almost beyond recognition, he navigates City’s darkest corners, doing some of its darkest deeds. In this collection, he’ll pursue an elusive thief, bent on raising an army of juiced up mutants. He’ll break into the office building of a mysterious corporation, only to find the executives are less into sending faxes and more into performing hexes.

In the final chapter, he’ll track a man through the Alleys of South City with the help of his tech savvy partner, Megan, and together they’ll face the sentient darkness of City’s deepest underbelly, and confront the violent potential of City’s most dangerous cults.

Part Blade Runner. Part Sin City. Stone Work is an action-packed ride through the rain-slicked streets of a dark, unforgiving urban landscape, rife with sadistic criminals, inter-dimensional abominations, and a creeping darkness that seeks to erase the last, now almost mythical traces of human goodness left in a world always teetering over the edge of its own extinction.

“With Whiskey for Breakfast, Dominic Stabile provides a page turning mystery that kept me guessing as to who the real killers might be.” – Brenda Casto, Readersfavorite.com

Dominic Stabile’s short fiction has appeared in Fossil Lake III: Unicornado!, Sanitarium Magazine, The Horror Zine, Atticus Review, Far Horizons, and has been adapted as a radio play by Manor House Productions. He has held jobs as a warehouse worker, cashier, bookstore associate, textbook manager, and carpenter. He’s a born southerner, transplanted to Penobscot, Maine by a desperate desire to escape retail work. When not writing or reading, he enjoys horror, sci-fi, and noir films, westerns, and bourbon.

Read his blogs on all things horror at dominicstabile.com.

Watch for more links to come!

If you would like a copy of the book for review or to conduct an interview with Dominic Stabile, please contact Erin Al-Mehairi, Marketing and Publicity at Mirror Matter Press and Hook of a Book Media: hookofabook@hotmail.com.