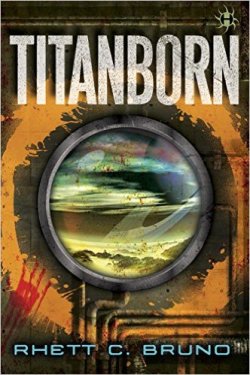 Originally reviewed for The Bandwagon, copy provided by the author in exchange for an honest review

The year is 2334 and Malcolm Graves is on another one of his collector missions.  This time he needs to keep Yev Tavar from stirring up trouble on the asteroid Undina.  Yev is one of many miners stripping Undina of its resources and is organizing a strike with the miners.  Malcolm works for Pervenio, the corporation running the mining operation and will go to any length to stop him before a full-blown riot take place.  But after a less than satisfactory outcome in dealing with Yev Malcolm is sent on ‘vacation’ to the city of New London on Earth.  Rhett gives us the history of Earth, how a meteorite nearly ended the human race 300 years ago and why much of the human race now lives on Titan, the best planet available to keep the human race from becoming extinct.  Arc ships with thousands of people are leaving Earth in search of other planets to colonize other planets as Earth becomes harder to inhabit.

While on R&R in New London Malcolm meets a man from the Ring and quickly figures out something is off about this guy.  Malcolm’s vacation is cut short as he is suddenly back on the clock.  After his last job, Director Sodervall has assigned Malcolm a partner, the first in his career and he’s not happy about it.  But Malcolm has had a partner of sorts before, just not in an official capacity.  Rhett tells us the history of Malcolm and his estranged daughter.  How Malcolm wanted her to follow in his footsteps, why she is estranged and what career she pursued.  I loved the way Rhett gave him dimension and depth and I really enjoyed the character development between Malcolm and his partner Zhaff.  Malcolm learns a lot about himself while having a partner for the first time and his own failures in the relationship with his daughter.  The story moved along at a really good pace and there was no shortage of action.  Titanborn has good character development and Malcolm learns about his relationships and why they tend to fail.  The reason for the Children of Titan’s actions had a nice tie in with earlier elements of the story.  Rhett gives the us a very enjoyable read with characters that are easy to connect with.

Malcolm Graves lives by two rules: finish the job, and get paid. After thirty years as a Collector, chasing bounties and extinguishing rebellions throughout the solar system, Malcolm does what he’s told, takes what he’s earned, and leaves the questions to someone else–especially when it comes to the affairs of offworlders.

But his latest mission doesn’t afford him that luxury. After a high-profile bombing on Earth, the men who sign Malcolm’s paychecks are clamoring for answers. Before he can object, the corporation teams him up with a strange new partner who’s more interested in statistics than instinct and ships them both off to Titan, the disputed moon where humans have been living for centuries. Their assignment is to hunt down a group of extremists: Titanborn dissidents who will go to any length to free their home from the tyranny of Earth.

Heading into hostile territory, Malcolm will have to use everything he’s learned to stay alive. But he soon realizes that the situation on the ground is much more complex than he anticipated . . . and much more personal.

Rhett has been writing since before he can remember, scribbling down what he thought were epic stories when he was young to show to his friends and family. He currently works at an Architecture firm, but that hasn’t stopped him from recording the tales bouncing around inside of his head. Rhett is the author of “The Circuit Series” and “Titanborn.”

He’s happy to hear from his fans and can be reached at rcbruno44@outlook.com!