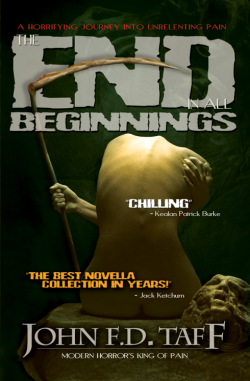 To Purchase The End in All Beginnings Click Here

The End in All Beginnings is a collection of horror that’s a literary tour de force through the emotional pain and personal anguish of the human condition. Praised as one of the best collections of heartfelt and gut-wrenching horror written in recent history, it’s a disturbing trip through the ages exploring the painful tragedies of life, love and loss.

Each of the five masterfully written novellas included in The End in All Beginnings examine complex themes running the gamut from the loss of childhood innocence, to the dreadful reality of survival after everything we hold dear is gone, to some of the most profound aspects of human tragedy.

As one of the best storytellers of the modern age, John F.D. Taff takes readers on a skillfully balanced emotional journey into nostalgia, through personal pain and beyond the everyday terrors that are uncomfortably real over the course of the human lifetime. His straight-forward, nuanced writing style is at times darkly comedic, often deeply poetic and always accurate in the most terrifying of ways.

Praise for The End in All Beginnings:

“The End in All Beginnings is accomplished stuff, complex and heartfelt. It’s one of the best novella collections I’ve read in years!” – JACK KETCHUM, Bram Stoker Award®-winning author of The Box, Closing Time and Peaceable Kingdom

“Taff brings the pain in five damaged and disturbing tales of love gone horribly wrong. This collection is like a knife in the heart. Highly recommended!” – JONATHAN MABERRY, New York Times bestselling author of Code Zero and Fall of Night

“Taff is a standout talent. Look no further than this collection for evidence that not only is horror not dead, there are new proponents of the craft capable to carry it into the future.” – KEALAN PATRICK BURKE, Bram Stoker Award®-winning author of The Turtle Boy, Kin, and Jack & Jill

If there’s a reason John F.D. Taff is called “The King of Pain” it’s because of the stories found in the pages of The End in All Beginnings.  From the opening novella titled What Becomes God, he immediately tears our hearts out with strong emotion.  This felt like my life as a kid.  The story is about two young kids, not quite teens, and how life is spent when days are endless and summer stretches forever.  I was instantly taken back to the same time in my young life and how I spent all those great days with my best friend.  In What Becomes God tells the tale of Brian and Charlie, who is sick but refuses to slow is pace as any kid his age.  We’ve all seen young kids with the unlimited energy and as I look back while reading this story I wish I had that energy now.

Brian and Charlie have great adventures, the kinds most of us who were lucky enough to have back in the day before the world became scary and unsafe.  The story is told by Brian as he looks back on their childhood and he pieces together the events from the perspective of an adult.  The perspective only someone who has lived those years can do.  There is plenty of raw emotion, excitement and even some heartfelt heaviness within these pages.  The horror that unfolded on me as the story neared the end was a fantastic twist, I had to pause a think “what just happened”.  I am continuously surprised and amazed at the range John F.D. Taff shows in his writing, I first knew his books as horror or dark fiction then seeming out of nowhere he smacks me with emotions and stories that I don’t easily forget.  This kind of emotional story telling can be found in his story Some Other Day from Death’s Realm.  This first story is one of those that will stick with me for some time.

Object permanence is a fantastic tale of remembering and forgetting, but mostly forgetting.  The story starts out hard and fast, hits the ground running and doesn’t let up.  Chris has to keep remembering himself while kept in an asylum.  This part of the story is like a nightmare better read about than dreamt.  As we follow Chris’s journey to remember we find out that everything he has been through is meant to keep things the same.  His aunt Olivia has a hold on him and in fact everyone in the small town.  The idea of objective permanence is clever and brilliant, the power to keep things the same through remembering and the power to have something disappear through forgetting.  But Chris has a trick or two in store for aunt Olivia before it’s all said and done.

Love in the time of zombies takes a zombie story and makes you want to read it.  So many zombie stories are the same but John F.D. Taff puts his special twist in the mix and the story isn’t as straight forward as I thought it would be.  Durand learns the end of the world has arrived and as he enters town he finds out how it ends, zombies are everywhere.  With the quick thinking of a young kid in a cafe he is spared the fate of the majority.  Scott the young man fills him in on what has happened.  The action and vivid descriptions are more than enough to give it a good horror and shock factor.  As the story progresses the love story unfolds and Durand isn’t the only one in love and it’s quite a love story at that.  Never one to miss the opportunity for a good twist John F.D. Taff delivers in fine style.

The long, long breakdown was an unexpected treat, I love end of the world stories and Mr. Taff delivers a great story.  The long long breakdown is about a father and daughter who for the past 10 plus years have lived in a penthouse suite surrounded by water. The world has been flooded and little remains of cities around the world. The story is heartbreaking as the father realizes he can not longer keep his daughter from living life, not just surviving. Their life consists of scouting for what they can manage to recover from a broken world. Cassie is mostly interested in exploring the world and her father is mostly interested in protecting her from the unknown.  The basis of the story is about a father learning the hard lesson of letting go as his daughter grows up and wants to be more independent.  Again an emotional story hidden behind the action and a hard one every parent has experienced.

Visitation the last story in the collection for me was a great story.  I really liked seeing or reading, however you like to think about it, a bit of science fiction mixed in the book.  This is the first time I have read anything like it by this author and think he did a great job mixing science fiction with the ghost story which is at the heart of the story.  Visitation is a story about Fen who has won the lottery to spend 14 days on a planet where ghosts are not only seen by loved ones but a place where you can talk and interact with them.  Little does Fen know what awaits him on the planet Ophion and all is not what it seems and rarely is in any great horror story.  The emotion and mental struggle is just as great and trying in this last story as it was in the first.

John F.D. Taff doesn’t just give us horror that scares us or makes us jump or even say “OH crap I didn’t see that coming”.  He fills the horror in with deeply tied emotions and gives us something to consider or ponder.  I have really come to love the story within the story and the deeper meaning he cleverly works behind the horror.  He never disappoints me and I always know when I see a new story he has just finished it’s going to be a roller coaster ride.  This I mean in the most positive way possible, the stories have that jolt that gets them started, the long and gut wrenching climb and the plunge as the coaster races down the seeming vertical drop.  I have read nearly all of the authors work, The Bell Witch is still left to finish, and each book, short story or novella is better than the last.  If you haven’t read John F.D. Taff you are seriously missing out and you should grab one of his books or an anthology that  has a story by him.

2 thoughts on “John F.D. Taff – The End in All Beginnings Review”