The Scary Reviews is excited to have Dale Elster here to talk about his new release of Deadsville.  Deadsville was released a month ago and is just in time for the best month for any horror fan, Halloween, and you will be able to read what I think about Deadsville here on The Scary Reviews in the near future.

A one-stoplight town in the middle of nowhere, on the way to nowhere. A town ruled by quiet, country boredom, nestled between rolling hills and dense forests. Bordered by vast stretches of farmland. A quaint community of friendly faces, charming landscapes, picket fences. An idyllic rural existence. Maybe it is. But the locals have another name for their town: Deadsville.

And not for the reason you think. You see, this town holds many secrets. Nothing is as it seems. Old houses serve as something more than homes for the living. Killers walk amongst the townsfolk. Monsters are real. You’ve found Evil’s hometown. So be prepared to stay. You’re going to be a permanent resident. Because even if you get out, there’s no escape.

Deadsville is a collection of ALL NEW horror stories from authors T.D. Trask and Dale Elster, set in the fictional upstate town of Rock Creek, NY. The book in your hands is your personal invitation to join them as they reveal the darkness lurking there, hidden within the people who walk its streets. Haunting the places daylight never finds. Waiting for your arrival.

I grew up in the 70’s and 80’s, with the two decades roughly dividing my childhood and teen years. For me, this era was modern horror’s Golden Age. For a young horror fan like myself, it was a great time to be alive! I must confess: I was not born a horror fan. I was made a horror fan. Under some very odd circumstances.

The youngest of five children, I was the baby of the family. And the scaredy-cat. I spent years being terrorized by my three sisters every Halloween. One would lure me into the costume aisle, where another would approach me in a clown mask, laughing as I screamed and ran away. My oldest sister pushed me into the hedges next to our front porch, through a spider web, no less. That incident resulted in my mother having to tear the shirt off her frantic five year-old son’s back and swat what seemed like a thousand spiders. In reality, it was probably closer to one. My mother came down on the girls pretty hard whenever she caught them teasing me, but I still had a couple more Halloweens of costumed horrors to endure before I was no longer scared of clowns, ghosts, and witches. When my old fears turned to excitement, my sisters moved on.

I began watching every kind of horror movie I could get my eyes in front of, (late night, after my unsuspecting mother thought I’d gone to bed) I began to add horror novels and anthologies into the mix.

The short story was – and continues – to be my favorite form of horror fiction. Rod Serling is largely to blame for that. I was obsessed with Twilight Zone reruns as a child, and even though the bulk of those episodes didn’t exactly fit the definition of horror, my love for the short story was born. Naturally, as my tastes turned to dark fiction, the anthology was a treasure trove of scary goodies waiting to be devoured like the bite-sized candy bars that got dropped into my bag every Halloween!

Flash forward a few decades. I had made a career as a chef for more than twenty years, writing horror fiction in my spare time, until a rare blood disorder forced an early retirement. Apparently, I was supposed to have died, so retirement didn’t seem like such a bad deal. In 2003, I put down my knives and dedicated myself to writing horror fiction full time. I was lucky enough to get some stories published in various small press anthologies over the next few years.

A couple of years ago, my dear friend Terry (T.D. Trask, professionally) approached me with an idea he had about creating a horror anthology and setting all the stories in the same fictional town. I loved the concept, as well as a few “vignettes” he’d written to get the ball rolling. I suggested we each write our own stories, with the exception of one, “The Other Redeemer,” which we’d initially written more than twenty years prior and had recently dusted off and rewritten.

With a firm concept, a handful of story ideas and a title, Deadsville was off and running! As we worked over the next several months, I hired artist Gary McCluskey, who had drawn the cover for another anthology I had been in, to work on the emerging Deadsville project. Once we received his nearly-completed cover, Terry and I were struck by how reminiscent of the 80’s horror trade paperbacks it was!

We had never instructed Gary to specifically create a cover that was vintage-themed, it just felt that way to us when we first saw it, and it delighted the hell out of us! Before we’d seen the artwork, we’d been discussing how the emerging collection was taking on the feel of the 80’s trade paperbacks we’d always treasured. Those books represented that glorious era when collections were populated with the likes of Dennis Etchison and Ramsey Campbell. Charles L. Grant and T.E.D. Klein. Richard Matheson. Stephen King. You get the idea.

Speaking of Mr. King, let me just take a moment and credit him with my passion for writing this stuff. Night Shift was – and remains – my favorite horror collection. Is there anything in this world better than early Stephen King?

Not that Terry or I are comparing ourselves to any of the aforementioned authors – nope. No way. Those gentlemen are legends for a reason.

What we wanted to achieve with Deadsville was a collection of our own that thrilled us like the stories we’d treasured from those classic old anthologies like Dark Forces and Night Visions. Stories that varied in length and tone, stories that (hopefully) would alter people’s perceptions of horror. We were after good characters that had interesting stories to tell.

How successful we ultimately were in achieving those goals depends upon the readers, of course.

With that, we invite you to take a trip to our town of Rock Creek, aka Deadsville. It’s a place where nothing is as it seems. Where killers walk amongst the townsfolk. Where monsters are real, and old houses serve as something more than homes for the living. A place of dark secrets, waiting to be revealed. Waiting for your arrival. 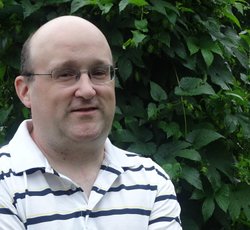 Dale Elster is a horror and dark fiction author living in upstate New York with his wife and two children.

His short fiction has appeared in anthologies by NorGus Press, Collaboration of the Dead, and the Stealth Fiction anthology, “Daylight Dims, Volume 2.” All are available at online retailers.

His house may or may not be haunted.
But it definitely is.

T.D. Trask is a freelance writer, copywriter, and Web site designer living in the great city of Binghamton, NY. His hobbies include following politics, movies, books, and, of course, the paranormal. His novels “Still Waters” and “Legend of the Tiger” are available at online retailers.