What if the coolest girl you’ve ever met decided to be your friend?

Art Barbara was so not cool. He was a seventeen-year-old high school loner in the late 1980s who listened to hair metal, had to wear a monstrous back-brace at night for his scoliosis, and started an extracurricular club for volunteer pallbearers at poorly attended funerals. But his new friend thought the Pallbearers Club was cool. And she brought along her Polaroid camera to take pictures of the corpses.

Okay, that part was a little weird.

So was her obsessive knowledge of a notorious bit of New England folklore that involved digging up the dead. And there were other strange things – terrifying things – that happened when she was around, usually at night. But she was his friend, so it was okay, right?

Decades later, Art tries to make sense of it all by writing The Pallbearers Club: A Memoir. But somehow this friend got her hands on the manuscript and, well, she has some issues with it. And now she’s making cuts.

Seamlessly blurring the lines between fiction and memory, the supernatural and the mundane, The Pallbearers Club is an immersive, suspenseful portrait of an unusual and disconcerting relationship.

Having read Disappearance at Devil’s Rock, and loving everything about it, I was excited about the latest from Paul Tremblay. From the cover to the nerdy protagonist I couldn’t wait to dive in. As the story got underway I enjoyed Art and his struggles as a nerdy kid. I could relate, I too was a nerd at his age. When Art mustered up the bare minimum to get the pallbearers club underway, I thought, cool here we go. The funerals the club attended and the awkward interactions at the funeral home were entertaining.

As the story progressed, and the pallbearers club disbanded, so did my love of the book. Mercy and her crazy effects on Art became less and less interesting. It soon became clear why, I’m not a fan of vampire stories (I should have read the small print more closely). Mercy’s character was fun, in relation to the comments about the novel/memoir, but not as much as a character in the story. I found much of the book dragging with long passages, while other chapters were fun and well paced. Overall, The Pallbearers Club was a mixed bag for me, but I’m a fan and will be waiting for Paul Tremblay’s next work.

Link to purchase The Pallbearers Club 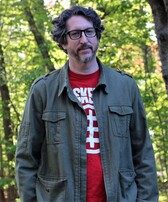 Paul Tremblay is the author of the Bram Stoker Award and Locus Award winning THE CABIN AT THE END OF THE WORLD, winner of the British Fantasy Award DISAPPEARANCE AT DEVIL’S ROCK, and Bram Stoker Award/Massachusetts Book Award winning A HEAD FULL OF GHOSTS. A HEAD FULL OF GHOSTS is in development with Focus Features. He’s also the author of the novels The Little Sleep, No Sleep till Wonderland, Swallowing a Donkey’s Eye, and Floating Boy and the Girl Who Couldn’t Fly (co-written with Stephen Graham Jones).

His newest book is the short story collection GROWING THINGS AND OTHER STORIES.

His essays and short fiction have appeared in the Los Angeles Times and numerous “year’s best” anthologies. He is the co-editor of four anthologies including Creatures: Thirty Years of Monster Stories (with John Langan). Paul is on the board of directors for the Shirley Jackson Awards. He lives outside of Boston, Massachusetts, has a master’s degree in Mathematics, and has no uvula. You can find him online at http://www.paultremblay.net. twitter: @paulgtremblay