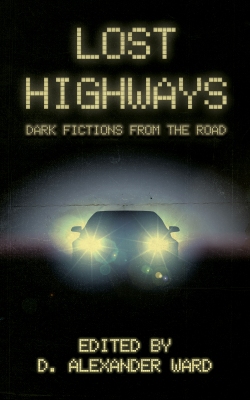 The highways, byways and backroads of America are teeming day and night with regular folks. Moms and dads making long commutes. Teenagers headed to the beach. Bands on their way to the next gig. Truckers pulling long hauls. Families driving cross country to visit their kin.
But there are others, too. The desperate and the lost. The cruel and the criminal.
Theirs is a world of roadside honky-tonks, truck stops, motels, and the empty miles between destinations. The unseen spaces.
And there are even stranger things. Places that aren’t on any map. Wayfaring terrors and haunted legends about which seasoned and road-
weary travellers only whisper.
But those are just stories. Aren’t they?

Find out for yourself as you get behind the wheel with some of today’s finest authors of the dark and horrific as they bring you these harrowing
tales from the road. Tales that could only be spawned by the endless miles of America’s lost highways. So, go ahead and hop in. Let’s take a ride.

Crossroads of Opportunity by Doungjai gam & Ed Kurtz
Where the Wild Winds Blow by Matt Hayward
Not from Detroit by Joe R. Lansdale
A Life That is Not Mine by Kristi DeMeester
Mr. Hugsy by Robert Ford
Swamp Dog Lisa Kröger
No Exit by Orrin Grey
The Long White Line by Michael Bailey
Jim’s Meats by Kelli Owen
Back Seat by Bracken MacLeod
The Heart Stops at the End of Laurel Lane by Jess Landry
Titan, Tyger by Jonathan Janz
Your Pound of Flesh by Nick Kolakowski
Requital by Richard Thomas
That Pilgrims’ Hands Do Touch by Damien Angelica Walters
Outrunning the End by Cullen Bunn
Motel Nine by Christopher Buehlman
Dew Upon the Wing by Rachel Autumn Deering
Room 4 at the Haymaker by Josh Malerman
The Widow by Rio Youers

For me the joy of any anthology is discovering writers I’ve not read before. Also, it’s a plus if I find a new story from a writer I’ve read and really dig. Not every story was a hit, but the writing was good from all of the authors. Lost Highways started off a bit slow, but quickly picked up its pace, and I wasn’t prepared for the dark variety of stories that were in this anthology.

Where the Wild Wind Blows by Matt Hayward put a nice twist on a windy mountain drive. A man just wanted to get home, but what he found was an unrelenting fog filled with dark visions. Mr. Hugsy by Robert Ford was a slow build, which I dug. He gave the ending a nasty twist that was ironic, funny, and cleaver. It’s never good when a child gets the best of the parent. No Exit by Orrin Grey was a great ghost story. It was creepy and haunting how the mind can trick you, and do it so easily. The Long White Line by Michael Bailey was one hell of a story. This was the kind of mind game that makes me love a good horror story.

Jim’s Meats by Kelli Owen was anxiety inducing within minutes. I felt all the panic she was throwing and I was flipping pages as fast as I could. I also loved, Your Pound of Flesh by Nick Kolakowski. It was crafty and had me wondering what was real. As the story concluded, all the pieces came together, and I thought, what an excellent move. Well done sir! Outrunning the End by Cullen Bunn was hypnotic, strangely unsettling and eerie, as the main character struggled with reality. I loved the way the truth was bubbling just below the surface waiting to be revealed.

These were my favorites stories, and while many others were good, they didn’t leave me blown away. This is how it usually goes for me with any anthology.