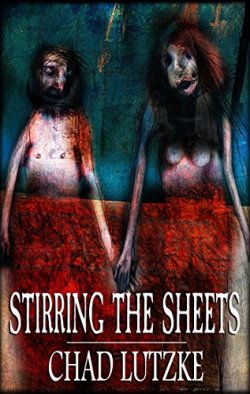 Genre: Horror
Length: 130 Pages
Publisher: Bloodshot Books
Release date: April 13, 2018
Synopsis: An elderly funeral home worker, struggling with the loss of his wife, finds an unnatural attraction to a corpse at work resembling his late bride in her younger years.

A story of desperation, loneliness and letting go.

Emmett’s emotional struggle of loss, while trying to maintain a daily routine, stirred a small dark place deep inside of me. I can still feel that same pain Emmett experienced, on occasion. The way Chad Lutzke could capture that loss and the mood someone feels from that kind of loss was spot on, and scary. Taking the journey with Emmett while he tried to navigate his ‘new’ life was emotionally taxing. I felt the sorrow, the uncertainty, and could see the hopefulness attached to the guilt that comes with trying to move on.

It’s the moments when someone asks, ‘how are you?’, knowing full well the answer being given for the sake of appearances. Moving on happens whether you want to, or are ready. This was Emmett’s largest hurdle, plus the task of doing what it took each day. I was surprised by, and enjoyed the one shining moment of laughter late in the story. It was greatly needed to bring me back to the present. It fit the narrative like a glove and was just what Emmett needed to get his life moving forward.

This novella packed a lot of punch, and was nothing short of a great read. I knew when I read Chad Lutzke’s first novella, Of Foster Homes and Flies, I had stumbled on a writer I should keep an eye on. If you haven’t read that book, I recommend you add it to your list, as well as Stirring the Sheets.

Link to purchase Stirring the Sheets

Chad lives in Battle Creek, MI. with his wife, children, and far too many dogs. For over two decades, he has been a contributor to several different outlets in the independent music and film scene including articles, reviews, and artwork. Chad loves music, rain, sarcasm, dry humor, and cheese. He has a strong disdain for dishonesty and hard-boiled eggs. He has written for Famous Monsters of Filmland, Cemetery Dance, Rue Morgue, and Scream magazine. His fictional work can be found in several magazines and anthologies including his own 18-story anthology, NIGHT AS A CATALYST. He has written a collaborative effort with horror author Terry M. West, THE HIM DEEP DOWN. In the summer of 2016, Lutzke released his dark coming-of-age novella OF FOSTER HOMES AND FLIES which has been praised by authors Jack Ketchum, James Newman, John Boden, and many others. Later in 2016, Lutzke released his contribution to bestselling author J. Thorn’s AMERICAN DEMON HUNTER series with AMERICAN DEMON HUNTERS: BATTLE CREEK, MI. and finally winter 2017 saw the release of his novella WALLFLOWER, a story of addiction, delusions, and flowers. Chad can be found lurking the internet at the following address: www.chadlutzke.com