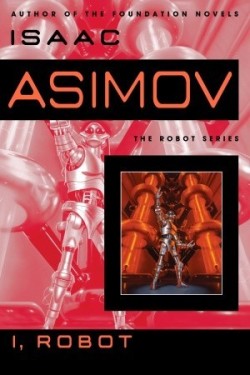 As with most books that are made into movies I hate to watch the movie first. I’m convinced it will wreck the book for me. I could cite plenty of examples, but that’s for another time. I remember loving the movie I Robot, and luckily the movie is completely different. In the book the story is told from the point of view of Dr. Calvin, a leading psychologist in the field of Robotics. Dr. Calvin recounts her experience with the first robot a family had as nursemaid and companion for a child. This first short story is an interesting introduction to robots but the writing is very dated and felt out-of-place in contrast to the rest of the book.

As robots became more advanced it didn’t take long before they were banned on Earth, except for research purposes. The three laws of Robotics had some flaws and in the stories that follow and we see how each scenario is worked out. The problem becomes, how do we give some rules more importance than others and still keep the three laws valid. Another problem that was unforeseen, and one I found really interesting, was a robot that had enough self-awareness to exhibit curiosity about his own existence. This is a frightening thought! Now the robot is smart enough to question the facts he is given. He is convinced that he was created by a higher power and humans aren’t smart enough to have made him.

Law number one states a robot may not injure a human being or, through inaction, allow a human being to come to harm. What if physical injury isn’t the only way a robot could harm a person, what if lie would cause harm? Law number one is more encompassing than first thought. I love this twist, leave it to a robot to take the rules to the next level. I Robot steps us through multiple scenarios where one or more of the laws make it difficult for the robot to do a task and all of the endless scenarios fascinating. Another really fascinating question was asked, what if the death of a human being is temporary, would that break law number one? What happens when robots become so advanced that we can’t distinguish them from a human being? I Robot was so far ahead of its time it’s scary. We haven’t arrived in this possible future yet but when we do I hope we don’t forget the three rules that Issac Asimov invented. I’m sure if we make robots this advanced we are in for a world of hurt. I saw the terminator, that went poorly and in the movie version of I Robot it didn’t end well either!