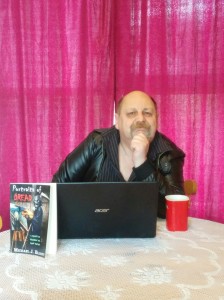 On Halloween 2015, Aussie horror writer launched his first collection of shorts,  Portraits Of Dread. His first work was very well received and gained him some very favourable reviews. Now, exactly a year later, Michael is set to chill his readers again with his new collection, Choice Cuts-A Bite From The Dark Realm.

As Michael explained, “This is another eclectic mix of stories, from dystopia, to good old fashioned horror. I hope I’ve created a nice mix for my readers. I’ve tried to add that unexpected twist and the wry humour which readers have told me they enjoyed in  my first collection.”

Deep within the bowels of an ancient mountside convent, Sister Elizabeta is locked away praying for forgiveness while the Council of Elders decide on a horrific punishment for her sins. What was Sister Elizabeta’s transgression and what is the punishment she is about to undergo?

A BITE FROM THE DARK REALM.

Something is eating the food at a suburban London supermarket. When his overbearing boss tells Allan to rid the store of whatever is infesting the store, he discovers something far more terrifying than rats and mice.

Jacob O’Halloran is a sexually repressed bachelor. He gains his fulfillment by stealing women’s panties from suburban clothes lines. When he tries to steal from Audrey he is going to be plunged into a nightmare because Audrey has some issues of her own.

Upon A Dark Horseman

Choice Cuts will be released this Halloween for the special promotion price of just 99c (Will be $4.99 from November 2nd.) You can pre-order Choice Cuts by clicking on the following links.

You can also buy the paperback version on the Amazon page for $10.99

Michael loves connecting with book lovers and readers from around the world. Feel free to ask him about his work or just say G’day at any of the following.