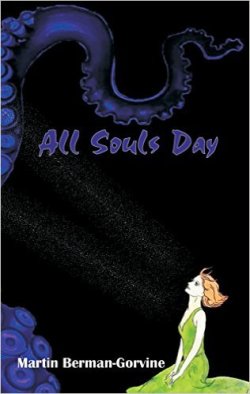 In Chatham’s Forge, in an alternate time line, a virgin is sacrificed each year. Suzie, Amos and the rest of the high school students are required to attend the sacrifice made to Moloch. It’s the 1980’s in a an alternate world left mostly destroyed after the Cuban missile crisis. Moloch keeps this small slice of America safe from the toxic wasteland and in return he is given a virgin sacrifice and is worshiped and feared like a god. No one is exactly sure if Moloch is a god or a demon. The town goes along with the sacrifices and are glad the wall he has built keeps the muties out. The story revolves mostly around Suzie and Amos along with a few of their close friends. Suzie’s mom is a Punisher, in charge of keeping people in line, and this makes it hard for Suzie’s and Amos’ to spend time together. Suzie is a Good Girl and Amos is a Nerd and the rules state they can’t have a relationship.

All Souls Day presents a funny look at high school and all the dynamics we all somehow survived. Suzie is one of the Good Girls, or the ‘Popular Girls’. Amos is one of the Nerds, no translation required. The Jocks, Punks and Sluts are also part of the cast of Chatham’s Forge. Rules are in place that determine which class can date another. No way would a Good Girl would date a Nerd, they can only date the Jocks. Suzie’s friend Vicki is part of a secret group called the resistance and soon Suzie along with Amos are part of the group plotting to rid Chatham’s Forge of Moloch and put a stop to the sacrifices. How they will get it done is another question. This years sacrifice will be Suzie and she spends all summer locked away until the next sacrifice.

All Souls Day is a good YA adventure but we don’t get much of the story surrounding Moloch. We only know he built a wall to keep Chatham’s Forge ‘safe’ from the muties living beyond the wall. I would have loved to know more about this mystery demon or god. It would have been interesting to know more about the world beyond the wall. The relationships were convincing enough and the adults were as oppressive as they should be. All Souls Day started off entertaining but fell short of enough tension to hold my interest though a large portion of the story. The final day of the virgin sacrifice and battle against Moloch had me interested again and the reader in the midst of a cliff hanger.

If a demon and its servants ruled your ordinary town, demanding an annual virgin sacrifice, would you have the courage to stop them? And at what price? This question confronts Amos Ross, Suzie Mitchell, and Vickie Riordan, high school seniors in the new horror novel, All Souls Day.

In an alternate reality of the 1980’s, twenty years after the Cuban Missile Crisis triggered World War III and left the United States a devastated wasteland, the ancient, demonic god Moloch, whose worship was forbidden by the Old Testament, exercises absolute control over the Philadelphia suburb of Chatham’s Forge. The town is an oasis of prosperity that the nuclear war hardly touched, but its comfort comes at a fearful cost: at the high school prom every year, the prettiest and most popular senior girl is chosen by Moloch and his servant, the evil Pastor Justin Bello, to be spirited away to a former National Guard armory known as the Castle, where she is imprisoned alone for five months only to be beheaded and eaten alive by the demon on All Souls Day, the second of November, the anniversary of the war. And this year, 1985, it’s Suzie’s turn…

Martin Berman-Gorvine grew up in the Philadelphia area and lived in Israel for six years. Writing as Martin Gidron, he is the author of The Severed Wing (Livingston Press, 2002), which received the 2002 Sidewise Award for Alternate History (Long Form). He is a professional business journalist, is married to Jacqueline Berman-Gorvine, an attorney with the Securities and Exchange Commission, and has two sons from a previous marriage. He lives in the Washington, D.C. area, where he is hard at work on his next novel, a ghost story set in the vanished village of Green Run, Assateague Island, Maryland.