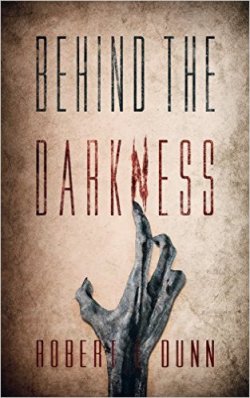 Max and his wife Sheila are on a hike in the mountains.  Max is at the plateau and starting to enjoy the setting sun when he sees a strange sight.  He calls for his wife to hurry before she misses this great view but in a flash his calls for her to hurry turn to calls for her to RUN!  Tyler and his wife Ashley have high hopes of a successful farm life until one day a cow is found dead and the unborn calf has been removed.  Mysteriously cool breezes and strange feelings that someone or something is lurking around the farm give them a funny feeling.  All over town there are strange occurrences of a passing cloud or movement in the corner of the eye that give Behind the Darkness a creepy feeling.  Robert Dunn’s writing gives you goosebumps and causes the hairs on your arm to stand up.  Ashley has strange feelings all day from the strange cool breeze on a 95 degree day that shouldn’t be there and she keeps having disturbing visions that make no sense.  The town’s people are no strangers to strange happening and hope the storm clouds are just a storm.

Max awakens to find himself at the mercy of the aliens, one moment he was on the mountain enjoying the view the next he finds himself being examined by strange terrible hands and instruments.  The scenes of Max aboard the UFO are stomach turning and this is what I find most frightening about aliens.  Robert does a great job describing Max’s horrible experiences and leaves me feeling a bit sickened.  As day turns to night for Tyler and Ashley the long day is becoming a longer night.  Max is dropped out of thin air and right in front of Sheila as she is on her way to the farm for a weekend visit.  Max’s night along with Tyler, Ashley and their two friends has many challenges ahead as this nightmare is far from over.  The story’s pace really picks up and the tension is thick as the darkness presses down on the farm and Max tells them what the aliens really want.  Behind the Darkness has plenty of tension, action, horror and characters you can connect with and if aliens are what scare you then give Behind the Darkness a read.

Max never had the chance to say goodbye, he did have the chance to scream. Violently taken from his wife and his world, Max is thrown into a nightmare of fear, agony, and experimentation at the hands of other worldly creatures stalking the night skies.

Twenty years later, four friends have gathered at an isolated Ozarks ranch to celebrate an upcoming birth. Their joy is shattered when the frail and unconscious body of Max falls from an ominous darkening sky kicking loose a roller coaster of violence and horror.

Through one seemingly endless night the friends find themselves surrounded, and at the mercy of nameless, unseen creatures. Desperation makes for difficult choices and even more difficult actions as two men learn just who they must be to fight the killers behind the darkness.

Robert Dunn (1960) was an Army brat born in Alabama and finally settled in Nixa, Missouri. A graduate of Drury College with a Bachelor of Arts Degree in Communications/Film he also earned a second major in Philosophy with a minor in Religion and carried an emphasis in Theatre. This course of study left him qualified only to be a televangelist.

An award winning film/video producer and writer, he has written scripts for or directed every kind of production from local 30-second television commercial spots to documentary productions and travelogues.

A writer of blognovels and contributor to various fiction websites his work has also included the book length prose poem, Uncle Sam, the collection of short stories, Motorman and Other Stories and novel, Behind the Darkness.