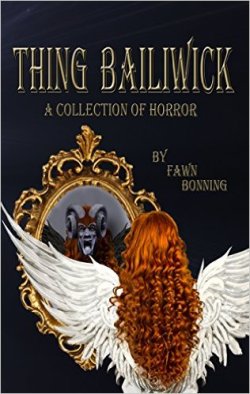 Short story collections are like those assorted boxes of chocolates. You look them over and hope you find the ones you like while avoiding the rest. Thing Bailiwick was like that box of candy. I found many of stories were a miss and probably better left unwrapped. But I did find a few that were a nice surprise and quite enjoyable. While there is creepiness, psychological weirdness, and even a bit of terror I was left mostly unsatisfied. The buildup in tension was lacking and unfortunately instead of developing the characters many of the stories are filled with overly descriptive language. Most of the stories would have been better served with far fewer words. Many plots are thin and meander without direction. One exception was Curveballs, which was entertaining and had me laughing. This was a gem among the collection, the story had a fun flavor and an edge that some may find offensive. It couldn’t be told any other way and I’m glad the author took that liberty. The tension was real and the horror and characters were good, which I would have loved to see in more of the stories.

The other story that was good and had much promise was Thing in the Woods. It had everything going for it and an appeal I could appreciate if I were a kid. The kids giving each other the kind of ribbing kids do was funny, but the ending was anti climatic and left me scratching my head. Sadly too many stories had potential and endings that fell short for me. There were too many times I had to suspend too much disbelief or see the rules of the story turn 180 degrees in just a few pages. The final story wrapped the book on a high note. A young boy sleepwalks to other lands while his mother’s vivid dreams come to life. I was pretty quickly able to get into this story. I found the tension and eeriness I was looking for and was glad the last piece from the box was a good one.

Only a monster would do what I’m about to do. The thought of it sickens me. I feel numb. Not just my body. My mind. I don’t want to think about it. I don’t want to look down at the meat cleaver in my hand. I just want to go back inside, slip into my warm bed and fall sound asleep. After I do this, I probably won’t ever sleep again. I’m not a monster. I’m not. I’m just a mom who wants to protect her children. I don’t want to do this. I have to. It all started eight days ago. That’s when I first saw D.

A little someTHING for everyone. Zombies, witches, goblins, vampires, werewolves, leviathans, ghosts, deMOMs, and other horrifying monsters of the human kind. 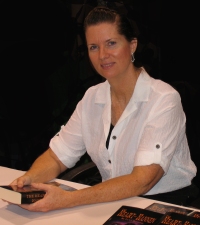 As a young girl, she was obsessed with the fantasy tales of Walt Disney that catered to her love of animals and took her to fantastic places.

In her teens, she became a hopeless horror junkie. Stephen King was her favorite fix and she’s still addicted to him to this day.

Her other influences include Tolkien (The Hobbit), Richard Adams (Watership Down) and Jean M. Auel (Clan of the Cave Bear).

Connect with Fawn Bonning at the following links