Earlier this month I had the pleasure of interviewing an author I have been reading since her debut novel The Phoenix Project was released.  I stumbled across D.M Cain on Twitter, I saw her profile picture and a her comments about a new book she was getting ready to release.  I followed her, we chatted back and forth in the Twitterverse, and she was generous enough to send me and advanced copy to read and review.  From that point forward I knew she was an up and coming author that I would read from here on out. It goes without saying this is an author I really enjoy and she was kind enough to take the time to talk with me about writing and her series The Children of Light. This is a project she feels deeply about and has been swirling in her head for some time.  For those not familiar with D.M. Cain she writes Fantasy with plenty of darkness and emotion.  Here is what she had to say when we talked.

Why don’t you tell us a little bit about yourself, where are you from? What propelled you to start writing? And at what age did you start writing?

I’m a primary school teacher in Leicester, UK. I’ve been working at my current school for 5 years teaching year 5 (aged 9 and 10 years.) It’s a great job and I love inspiring young minds – especially in writing!

Before becoming a teacher I completed my degree in Psychology and English Literature, and then jetted off to Japan to teach English as a second language. It was two of the most amazing years of my life and I had an incredible time learning all about Japanese history and culture.

I’ve been writing on and off for around fifteen years. I started writing ideas and random chapters of stories in my late teenage years, never settling on one plot. When I was around 19 years old I finally focused on my favourite idea – that of a dark, brutal prison where inmates were forced to fight to the death. This became ‘The Phoenix Project.’ I didn’t begin writing in earnest until around 6 years ago when I met Matthew (who would later become my husband.) He was a writer too and he inspired me to pick ‘The Phoenix Project’ back up again. I finished it within a few years and then turned to my next project, ‘A Chronicle of Chaos,’ which had been stewing in my head for years.

How much of yourself finds its way into your writing?  Experiences, philosophies, personal views?

Short answer – A LOT! Longer answer – I feel that the only way to really connect with your readers and get them to feel for your characters and plot is to pour a lot of yourself into your writing. Otherwise it can just feel quite sterile and unrealistic.

The Phoenix Project is extremely close to my heart and, hidden within the dark depths of the story are many of my own thoughts and opinions. Each of the characters (perhaps with the exception of the prison warden Roger Abbott) has something of me in them – each of them contains a small part of my personality (not the horrifically violent parts – despite what I write, I’m a complete softie!)

A Chronicle of Chaos also has a lot of myself in it, but in a different way. Where Phoenix contains my philosophies and anxieties, Chaos is a mixture of everything I adore. All the films, books and games that influenced me growing up have somehow wound their way into the Light and Shadow Chronicles, so I enjoy writing them so much! The characters are real people to me – people I utterly adore and feel very close to.

Who are you favorite authors? Which author(s) had a significant impact on you growing up?

My current favourite authors are Suzanne Collins (author of The Hunger Games and Gregor the Overlander) and C.L. Schneider (author of The Crown of Stones series), but I only got into their work very recently. I have always been a huge fan of Terry Brooks’ ‘The Word and the Void’ trilogy and Philip Pullman’s ‘His Dark Materials.’ As for books that influenced me growing up, there is a huge range as books have always played a large role in my life. Some notable works that I love are: The Picture of Dorian Gray, 1984, A Clockwork Orange, Lord of the Flies, The Yellow Wallpaper, Paradise Lost, Hamlet and Tess of the D’Urbervilles.

What is the best piece of advice you ever received from another author?

Never trust yourself to edit your own work. You are too close to your plot and your characters. Like a loving parent, you love your baby too much and don’t see the faults.

What was the last great book you read?

The last book that totally blew me away was ‘The Crown of Stones: Magic-Price.’ It takes place in a dark, oppressive fantasy world where magic is a drug that is powerful and consuming but also devastatingly addictive. The plot was everything I love – dark, brutal, deep and thought-provoking, epic and fantastical, but what really made this book come alive was the characters. The three main characters were brilliantly written, unique, and I became very attached to all of the them. If C.L. Schneider doesn’t make it big, there is no justice in the world!

To Purchase The Crown of Stones: Magic Price Click Here

What book are you reading now?

SEED: Keepers of Genesis #1 – I began reading this as part of an Indie book club I am a member of on Goodreads. It is a fantastic story, loaded with ancient biblical and historical mysteries and lore. A cracking read in the vein of The Da Vinci Code (but a bit more intelligent!)

How does your writing process work?

I tend to get a burst of inspiration and I just go for it. When I’m really entrenched in a story it takes hold of me and won’t let me go until it is written. Then I’m snatching every five minutes I can get to scribble down as much as I can. If I leave it for too long between writing passages, I tend to go off the boil and it takes longer to get back into it.

What do you love and hate about writing?

I love the initial writing experience. I listen to epic, orchestral music and throw myself whole-heartedly into the scene. When I’m writing, I am there with those characters in that event and the feeling is just indescribable. Losing myself in a world that I created, with character I feel so close to is an amazing experience.I also love editing my own work, tweaking and polishing it until I am really happy with the finished product.

What do I hate about writing? The first chapter. No matter what I do, no matter what I’m writing, I cannot do first chapters. I can guarantee that every first chapter I write will be terrible, as it takes a while to get into the plot and to really know the characters. So what I do now is accept that the first draft will be awful, then come back and rewrite it once the book is finished.

What do you like to do when you aren’t writing?

With a demanding full-time job and a hyperactive toddler, there isn’t much free time in my life! I tend to fill as much of my free time as possible with writing and editing my work, but I do also edit and proofread other authors’ work. I read a lot – mostly fantasy, and love to watch fantasy and sci-fi dramas such as Game of Thrones, Lost, Fringe, Heroes etc. I’m also a huge geek and love manga, anime and role-playing games such as Final Fantasy.

For those who haven’t read any of your books, what book of yours do you think best represents your work and why?

The two books I have written and published so far are very different. The Phoenix Project was a stand-alone novel, so I guess I would say A Chronicle of Chaos is more representative, as that’s what the rest of my work is going to be like.

What piece of your own work are you most proud of?

The Phoenix Project. It’s my baby It took 10 years to plot out and write and I always glow with pride when I think of that achievement.

Is there one subject you would never write about as an author? If so what is it?

I don’t think so. If something fits within the plot, then I would write almost anything. The Light and Shadow Chronicles has some pretty dark and disturbing parts and pretty much anything goes in that world! I don’t imagine that I would ever write a straightforward romance novel – not enough conflict and evil! I’m also pretty uptight about writing sex scenes. I always chicken out and fade away just before things get steamy!

I know how much you love the Fantasy Genre, what other Genres would you like to give a go or thought about trying?

I’ve got a few horror-esque ideas kicking around in my head and I am currently working on a children’s book (still fantasy but aimed at a younger audience.)

Can you tell me more about the world you created in The Children of Light series?

The world in the Light and Shadow Chronicles is in a state of eternal war between two nations – The Children of Light and Brotherhood of Shadow. They have been at war for thousands of years, in a stalemate that is manipulated by forces greater than any of the characters realise. In order for one side to shift the scales in their favour they have to recruit greater forces – angels, demons, dragons, armies of the underworld, magical beings etc. The war continues to grow in scale until the entire world is dragged into the conflict and it can only end in a cataclysmic Armageddon.Each of the novels in the series focuses on a significant character or group and their role within the battle. Every story is laying the foundations for something else, like building blocks for the epic finale. The books are written out-of-order – one story may feature a character in his adulthood, the next is set before he is born, the next after his death. Putting the order of events together is up to the reader. This means the books can be read in any order as each of them leads towards the climax, like the spokes of a wheel.

How many books do you plan on writing in The Children of Light series and over how many years do you think that will take?

Three of the novels in the series have been written already and a short story is underway at the moment. I think (though this may change!) there will be 16 or 17 stories, some of which will be full-length novels, some short stories or novellas. As for how long it will take, I really don’t know! I’m getting much faster at writing them but I suspect it will still take 10 – 15 years at least (unless I can ever make enough money to do it full-time!)

I loved The Phoenix Project, do you plan to write another book like it?

I would really like to return to something like The Phoenix Project but the foreseeable future is taken up with The Light and Shadow Chronicles. Who knows? I may take a break from the fantasy and delve back into depressing dystopia for a break sometime!

Thanks for your time and speaking with me here on my blog.  I really look forward to the next book in The Children of Light series.

Where can you find D.M. Cain?

You can find D.M. Cain’s on her Amazon Page Here 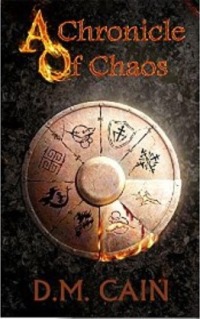