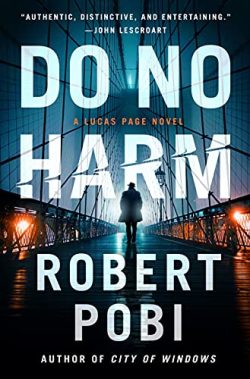 Genre: Crime Thriller
Length: 429 Pages
Publisher: Minotaur Books
Release date: August 9, 2022
Synopsis: In Robert Pobi’s thriller Do No Harm, a series of suicides and accidental deaths in the medical community are actually well-disguised murders and only Lucas Page can see the pattern and discern the truth that no one else believes.

Lucas Page is a polymath, astrophysicist, professor, husband, father of five adopted children, bestselling author, and ex-FBI agent—emphasis on “ex.” Severely wounded after being caught in an explosion, Page left the FBI behind and put his focus on the rebuilding the rest of his life. But Page is uniquely gifted in being able to recognize patterns that elude others, a skill that brings the F.B.I. knocking at his door again and again.

Lucas Page’s wife Erin loses a friend, a gifted plastic surgeon, to suicide and Lucas begins to realize how many people Erin knew that have died in the past year, in freak accidents and now suicide. Intrigued despite himself, Page begins digging through obituaries and realizes that there’s a pattern—a bad one. These deaths don’t make sense unless the doctors are being murdered, the target of a particularly clever killer. This time, the FBI wants as little to do with Lucas as he does with them so he’s left with only one option—ignore it and go back to his normal life. But then, the pattern reveals that the next victim is likely to be…Erin herself.

I’m a huge fan of Robert Pobi and the Lucas Page series. It’s not easy to write one outstanding book, let alone a trilogy. That just doesn’t happen often, but that’s exactly what happened here. The third installment was as good if not better than the previous two. Lucas Page is one the those characters you can’t get enough of, nor want to say goodbye to. Robot Pobi has a distinct style and voice, which is a plus for this reader.

I love the complexity of the cases Dr. Page works on, the math and the attention to detail enhances the plot. Do No Harm is meant for the kind of reader that wants smart writing with an intelligent storyline that grabs your attention and never lets go. The mental gymnastics involved with keeping track of who, what and why will prevent you from putting it down.

Robert Pobi doesn’t just create a set of characters, he gives them character. They are not a one dimensional individual in the story. They have a personality, that in the end makes you miss them when it’s time to close the book. I can’t recommend this series enough. For the math and numbers crowd, this is a must read.

Link to purchase Do No Harm

ROBERT POBI has fished for great whites off Montauk, chased coyotes with a dune buggy in the Mojave, and spelunked caves in the former Yugoslavia. He is a renowned expert in English period furniture and makes a mean coq au vin. He spends most of his time in Montreal, Canada.