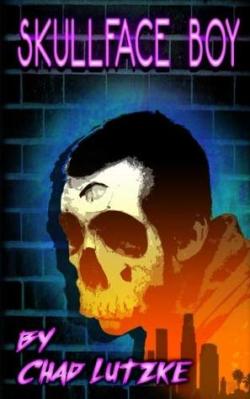 Genre: Horror
Length: 202 Pages
Release date: September 14, 2018
Synopsis: “My name is Levi. I’m 16. I’ve got a skull for a face. And here’s how shit went down.” Having never been outside the walls of Gramm Jones Foster Care Facility, sixteen-year-old Levi leaves in the middle of the night with an empty backpack and a newfound lust for life. A journey that leads him into the arms of delusional newlyweds, drunkards, polygamists, the dangerous, and the batshit crazy. His destination? Hermosa Beach, California where he’s told there is another like him, with the face of a skull. A coming-of-age road trip filled with surreal Lynch-ian encounters exploring the dark, the disturbing, and the lonely in a 1980s world—an epic venture for one disfigured boy struggling to find his place in the world.

Skullface Boy was my third visit to the world of Chad Lutzke. This story reminded me of Of Foster Homes and Flies, with a young protagonist and the challenges he encountered. Levi, the protagonist, left Graham Jones foster care to find his father and, possibly a better life. What he discovered was all the kindness, and ugliness that the world had to offer.

Chad Lutzke took a story that could have been depressing, turned it around, and gave Levi a great outlook on life and a refreshingly positive attitude. Levi’s life wasn’t great in foster care, but he wasn’t going to let that stop him.

I dig Chad Lutzke’s writing style and his ability to write young characters. His writing always has a smooth flow and a dialogue that feels natural, the adventures amazing. In the beginning I wasn’t sure I would like Levi, but in the end, it was hard not to.

Chad lives in Battle Creek, MI. with his wife, children, and far too many dogs. For over two decades, he has been a contributor to several different outlets in the independent music and film scene including articles, reviews, and artwork. Chad loves music, rain, sarcasm, dry humor, and cheese. He has a strong disdain for dishonesty and hard-boiled eggs. He has written for Famous Monsters of Filmland, Cemetery Dance, Rue Morgue, and Scream magazine. His fictional work can be found in several magazines and anthologies including his own 18-story anthology, NIGHT AS A CATALYST. He has written a collaborative effort with horror author Terry M. West, THE HIM DEEP DOWN. In the summer of 2016, Lutzke released his dark coming-of-age novella OF FOSTER HOMES AND FLIES which has been praised by authors Jack Ketchum, James Newman, John Boden, and many others. Later in 2016, Lutzke released his contribution to bestselling author J. Thorn’s AMERICAN DEMON HUNTER series with AMERICAN DEMON HUNTERS: BATTLE CREEK, MI. and finally winter 2017 saw the release of his novella WALLFLOWER, a story of addiction, delusions, and flowers. Chad can be found lurking the internet at the following address: www.chadlutzke.com