Genre: Crime Thriller
Length: 298 Pages
Publisher: Brash Books
Release date: February 1, 2018
Synopsis: Career criminal Longview Moody, on the run from killers, assumes his dead, twin brother’s identity as the new Chief of Police of a Texas town that’s being terrorized by a Mexican drug cartel. To pull off the deadly deception, Longview desperately works to become the kind of cop and man that his brother was. But when the two lives he’s living converge, he’s forced to embrace the violence within him to get justice…and vengeance.

I think thrillers are the genre that Robert E. Dunn excels at over all others, and Dead Man’s Badge is no different. Robert is one of my favorite writers, and this book is another winner in my opinion. From the beginning Longview, the protagonist, who was by all accounts a bad guy, was likable to me. He came from a family of law men and somewhere along the line, like many of us, made a few choices that didn’t go well. Robert has the great ability to create strong characters. Not the flat, glossed over, or thinly written kind, but the ones that as the book ends I want to keep reading about. This was never truer than when I read the Katrina Williams novels.

Longview was looking for something redeeming about his life. His choices were messy, sketchy and nothing less than short sighted at best. Robert continues to create characters that are searching for something deep within themselves, while walking the tight rope between life and death. Longview learns the hard way that life doesn’t care and you aren’t all that important. As his story arc developed, he tried to make decisions that set him on a better path.

While Longview was pretending to be his half-brother, he had taken his crazy life choices to another level. Threading the needle between being good and bad was exciting for me to watch, and the hard edge of his character made it all the better. While playing lawman, it felt like his house of cards could be destroyed at a moment’s notice. The mystery was complex and kept me guessing until the end and I dug that because I typically don’t figure it all out sooner. I hope I’ll meet up with Longview again in a sequel, that’s how much I loved this book!

“It’s terrific. It’s lean and smart and very good. I say, check it out.” Joe Lansdale

“Fans of Clint Eastwood’s spaghetti westerns will find a lot to like.” Publishers Weekly

“In Dunn’s capable hands, readers will jump onboard for the ride. Dunn is a gifted writer and he opens DEAD MAN’S BADGE with one of the most gripping scenes I’ve ever read. Fans of grit will love this fast-paced book.” Mystery Scene Magazine

“Riveting thriller about coming back from the dead, revenge and redemption. The pages fly by even faster than the bodies pile up. DEAD MAN’S BADGE establishes Robert E. Dunn as a formidable new name in hard-boiled fiction.” R.G Belsky, author of the Clare Carlson and Gil Malloy mystery series

“DEAD MAN’S BADGE sizzles with suspense! Dunn promises action on page one of this thriller and delivers the goods nonstop to the very end.” Margaret Mizushima, award-winning author of HUNTING HOUR.

“Brutal, vivid, and unforgettable…a modern-day western morality tale in crime-novel wrapping with a blood-red bow. This one will haunt you.” -Lee Goldberg, #1 New York Times bestselling author of TRUE FICTION

“DEAD MAN’S BADGE is crazy good, a great story, non-stop action, and a brilliantly-crafted hero. Dunn hit it out of the park with this one”. -Harry Hunsicker, former executive vice president of the Mystery Writers of America and the author of THE DEVIL’S COUNTRY 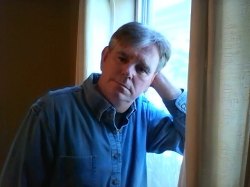 Robert E. Dunn was born an Army brat and grew up in the Missouri Ozarks. He wrote his first book at age eleven turning a series of Jack Kirby comic books into a hand written novel.

Over many years in the, mostly, honest work of video and film production he produced everything from documentaries, to training films and his favorite, travelogues. He returned to writing mystery, horror, and fantasy fiction for publication after the turn of the century. It seemed like a good time for change even if the changes were not always his choice.

Mr. Dunn is the author of the horror novels, THE RED HIGHWAY, MOTORMAN, and THE HARROWING, as well as the Katrina Williams mystery/thriller series, A LIVING GRAVE, A PARTICULAR DARKNESS, and the upcoming A DARK PATH.