Review copy provided in exchange for an honest review as part of the Confessions Publicity book tour.

Kealan wastes no time at all with Blanky, the story is off and running before I knew it. The opening few sentences will crush you in only the way a parent will understand, or someone who has lost a loved one. Our protagonist, Stephen, feels hopeless from the loss of infant daughter, Robin. One of his activities to keep him sane is the repetitive repair of his sweater. Stephen also escapes reality by staring at the TV and watching shows that take him anywhere but the present. The level of grief he feels is overwhelming and not easy to reconcile in his head because he blames himself. Stephen and his wife have packed all her belongings leaving them feeling like she wasn’t real.

These details are what make Blanky truly horrific and show the authors true talents. It’s easy to feel the personal hell the characters are living. I can say with firsthand knowledge, Kealan Patrick Burke has these moods and feelings captured. It’s nowhere you want to find yourself. For me Blanky was an emotionally draining and tough read. I found this quote by Kealan Patrick Burke to be so spot on, “…something this fucking apocalyptic…”. It completely encompasses the way these characters feel and isn’t understandable by those who haven’t experienced this kind of loss.

Blanky starts off very heavy and bleak but that’s just the beginning. Stephen will soon learn that a blanket isn’t just a blanket, or is it… Blanky had me looking right when I should have been looking left. The signs were well hidden but the truth was there. How I didn’t see it was due to the great story telling by Kealan. I hadn’t expected the ride to end where it did and the surprise revealed in the end was brutal. This is going to be another one of Kealan’s stories that sticks with me.

“In the wake of his infant daughter’s tragic death, Steve Brannigan is struggling to keep himself together. Estranged from his wife, who refuses to be inside the house where the unthinkable happened, and unable to work, he seeks solace in an endless parade of old sitcoms and a bottle of bourbon.

Until one night he hears a sound from his daughter’s old room, a room now stripped bare of anything that identified it as hers…except for her security blanket, affectionately known as Blanky.

Blanky, old and frayed, with its antiquated patchwork of badly sewn rabbits with black button eyes, who appear to be staring at the viewer…

Blanky, purchased from a strange old man at an antique stall selling “BABY CLOSE” at a discount.

The presence of Blanky in his dead daughter’s room heralds nothing short of an unspeakable nightmare that threatens to take away what little light remains in Steve’s shattered world.

Because his daughter loved Blanky so much, he buried her with it.”

A new novella from the Bram Stoker Award-Winning author of SOUR CANDY and KIN. 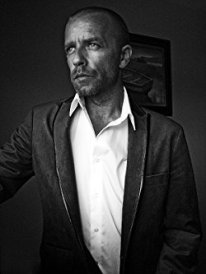 Born and raised in a small harbor town in the south of Ireland, Kealan Patrick Burke knew from a very early age that he was going to be a horror writer. The combination of an ancient locale, a horror-loving mother, and a family full of storytellers, made it inevitable that he would end up telling stories for a living. Since those formative years, he has written five novels, over a hundred short stories, six collections, and edited four acclaimed anthologies. In 2004, he was honored with the Bram Stoker Award for his novella The Turtle Boy.

Kealan has worked as a waiter, a drama teacher, a mapmaker, a security guard, an assembly-line worker at Apple Computers, a salesman (for a day), a bartender, landscape gardener, vocalist in a rock band, curriculum content editor, fiction editor at Gothic.net, and, most recently, a fraud investigator.

When not writing, Kealan designs book covers through his company Elderlemon Design.

A number of his books have been optioned for film.

Visit him on the web at http://www.kealanpatrickburke.com