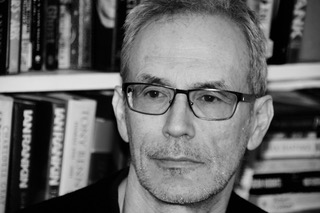 I write darkly psychological suspense thrillers, which draw heavily on my experiences as a police officer and child protection social worker. I guess, given my career, the genre chose me. I’ve written five books to date, and I’m currently working on the sixth, which I hope to finish by the end of the summer. I wrote a multi-agency child protection procedural manual, and articles for local newspapers and a national social work magazine during my working life, but White is the Coldest Colour was my first work of fiction.

I had a lot of time on my hands after leaving my post heading up child protection services for the county of Carmarthenshire in beautiful West Wales, and one day I decided to sit down and give it a go. I felt driven to complete it once I’d started, although I have to admit that it was a steep learning curve. I seriously considered deleting the entire manuscript more than once. The book took two years to complete with the able assistance of two professional editors, the second of whom understood what I was trying to achieve and made a valuable contribution to the end result. Writing it was somewhat cathartic in the main, although it did sometimes engender vivid memories that were, perhaps, best left in the past. By far the hardest thing was conveying such a brutal plot line without including any gratuitous or graphic detail. Achieving that end was very important to me, and I wouldn’t have published the book unless satisfied I’d succeeded in that regard. Fortunately, the majority of reviewers seem to agree.The book is intended primarily as an entertaining and tense thriller, but I also hope it conveys an important cautionary message to readers: be careful who you trust. Be very careful whom you trust. It contains content that some readers may find distressing from the very first page, and is dedicated to survivors of child abuse everywhere. It won’t be a book for everybody.

When Evil Calls Your Name, my second novel, is a sequel, although it can be read as a standalone. The book is written in a very different style to White, as if by Cynthia, the main character, in the form of a personal journal whilst serving a prison sentence. It is again primarily intended as an interesting read, but I hope it also goes some way to communicating the insidious negative effects of psychological and physical domestic violence on its victims. Some reviewers have thought that the book was written by Cynthia herself, one even saying that she was brave to write it given the horrendous things she went through. I find that gratifying. It’s intended to be a raw and realistic book, that while entirely fictional, was inspired by real events, as was the case for White. There are far too many real life Cynthia’s out there in the world, who suffer violence at the hands of men on a regular basis. I hope that the book plays a small part in bringing attention to what is still largely a taboo subject. Not everything is as it seems, and don’t be too quick to judge.

My third book, Portraits of the Dead, is a serial killer thriller full of twists and turns. Like my other two books, it’s set in Wales, which I think makes sense given that I spent the majority of my career working in my home country. I find it easier to write from experience, and I hope it gives the books an authentic air of gritty realism. Like all my books, it’s available as an ebook, paperback and audiobook. It’s also due to be published as a paperback and hardback in Hungarian in the near future.

My fourth book, Bully boy Blue, is a high tension novella that tells the story of a woman who goes to extreme lengths to escape her violent police officer husband. I’ve been incredibly lucky in that sales of my books have been better than I could have hoped. Each have become Amazon international bestsellers, reaching # 1 in multiple categories in the UK, Spain, France, Australia, Canada and the USA. I’d encourage anyone who’s considering writing a book to give it a go. The publishing world is changing fast and it’s never been easier to make your book available for purchase. Produce a quality product, send it to potential reviewers, and let the reading public decide if your book is worth buying and reading. You may well surprise yourself. 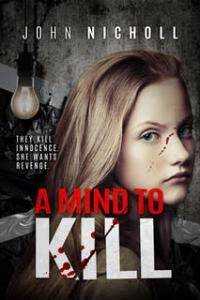 My new novel, A Mind To Kill, is available on Amazon now, with a 5 August release date. It’s a female revenge thriller: A ‘Death Wish’ for the modern world. They kill innocence. She wants revenge. When Rebecca’s childhood abuser escapes justice it sets her on path to revenge. Revenge on any man who preys on the innocence. Early Goodreads reviews have been better than I could have hoped.

Amazon link: A Mind to Kill

Website: I’m always happy to hear from readers and bloggers, and I can be contacted via my author website at: http://www.johnnicholl.com
Rights enquiries should be directed to Mr Toby Mundy – Literary agent at TMA: http://tma-agency.com