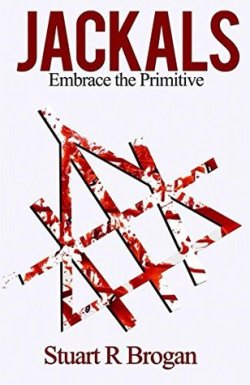 Jackals by Stuart Brogan takes you to a dark and disturbing world of killers on the loose in a small town in England. But this group, known as Jackals, is only the tip of the iceberg. This is part of the larger and insidious group known as the order.

Jackals is action packed and thrilling as Jesse struggles to survive the days following the attack on her and her husband. The group of killers only have one goal, to terrorize and insight fear.

The lead detective is an interesting character. He is filled with flaws and defects making his only job, to solve the case, a serious challenge. But his usual lack of interest is replaced by a new found drive to solve the murders and identify this group.

The history of the Jackals makes for an engrossing storyline. I loved the authors ability to create a secret society and make it feel completely legit. The order is a social club for serial killers and they are everywhere.

The character development solid. The plot contains interesting twists. There are several misdirections and double crosses leaving you unsure whom can trust. The level of crazy written into the multiple antagonists is comparable to America psycho.

I found the killers to be convincing and their actions disturbing with the level of graphic violence. I really enjoyed the fact that no one is off limits, any character is a possible target for death. The ending of Jackals was perfect, a complete surprise and came at me from left field. Stuart Brogan has written a solid debut novel with Jackals and I look forward to reading his work in the future.

From the aftermath of a brutal massacre at a rural police station, two survivors leave behind a swathe of bodies and a cryptic sigil painted on the wall, in blood.

A disgraced Detective Inspector begrudgingly starts to investigate the crime scene but as the facts begin to emerge the trail appears to lead into the highest echelons of power, making the policeman himself the next target.

As the conspiracy spirals ever deeper and with no-one to trust, both prime suspect and policeman are forced into an unlikely alliance to prove, not only their innocence, but the existence of a force so ingrained into our society, it could rewrite the very fabric of human nature. 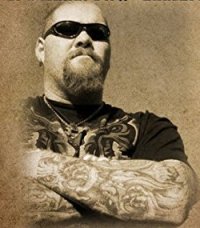 ​Harley lover, extreme metal drummer and avid movie nerd, Stuart has never followed the crowd but instead carved his own path and danced to his own tune. Since his early years, Stuart found escapism in both the written word and the silver screen. A huge fan of 80’s Action / Horror movies such as The Thing, Aliens, Predator & Die Hard and literary heroes such as Shaun Hutson, Clive Barker, Richard Layman and Brian Lumley, Stuart endeavours to bring an unapologetic cinematic eye to his fiction in the hopes of rekindling his childhood sense of wonder, all whilst blowing through vast amounts of ammunition down his local shooting range.