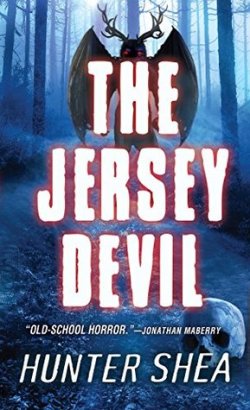 I love it when I see a new Hunter Shea book pop up in my e-mail alerts. To borrow a term used by Stephen King fans, I’m a constant reader when it comes to Hunter’s work. While I wait for his next book to be released I wonder what monster or creature is waiting to scare the holy hell out of me. Hunter does an excellent job with cryptids and legends, which he seems to know a lot about. From aliens in The Dover Demon to the chimaera fish in They Rise and now a winged beast in the The Jersey Devil, the creatures are fantastic. The image on the cover along with the sound this creature makes would make me pee a little if I saw or heard one in the dark woods of the Pine Barrens.

As it usually goes, I find myself reading Hunter Shea books when it’s dark and/or gloomy out. This only adds to further scaring the crap out of me. The early brief sightings of The Jersey Devil gave me chills. Hunter’s monsters continue to scare me, even knowing I’m safe and sound on my sofa. It’s the same heart pounding sensation I get watching a horror movie and knowing I can turn the lights back on. Hunter crafts his monsters, gives them a history, and builds a mythology surrounding them. He then puts them in an everyday landscape and suddenly they have become as real as his characters. Hunter also does a great job keeping the story moving along with constant pacing and action. The final showdown with the Jersey Devil was brutal and exciting and I wasn’t sure anyone would make it out alive. This is one damn scary monster story and one of my favorites books from Hunter Shea. I hope you’re busy with the next one, Hunter. I can’t get enough of your books and monsters. 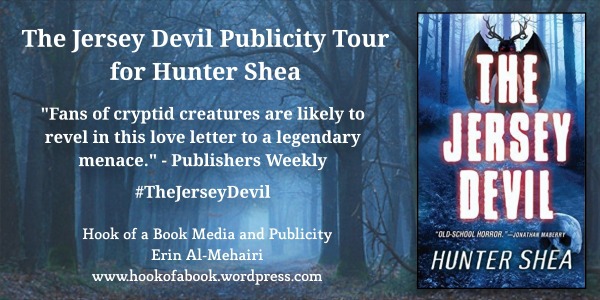 THE LEGEND LIVES
Everyone knows the legend of the Jersey Devil. Some believe it is an abomination of nature, a hybrid winged beast from hell that stalks the Pine Barrens of southern New Jersey searching for prey. Others believe it is a hoax, a campfire story designed to scare children. But one man knows the truth…

THE DEVIL AWAKES
Sixty years ago, Boompa Willet came face to face with the Devil—and lived to tell the tale. Now, the creature’s stomping grounds are alive once again with strange sightings, disappearances, and worse. After all these years, Boompa must return to the Barrens, not to prove the legend is real but to wipe it off the face of the earth…

THE BEAST MUST DIE
It’ll take more than just courage to defeat the Devil. It will take four generations of the Willet clan, a lifetime of survivalist training, and all the firepower they can carry. But timing is critical. A summer music festival has attracted crowds of teenagers. The woods are filled with tender young prey. But this time, the Devil is not alone. The evil has grown into an unholy horde of mutant monstrosities. And hell has come home to New Jersey…

“Shea delivers a tense and intriguing work of escalating tension splattered with a clever, extensive cast of bystanders turned victims…An otherwise excellent, tightly delivered plot…Fans of cryptid creatures are likely to revel in this love letter to a legendary menace.”– Publishers Weekly

“Hunter Shea is a great writer, highly entertaining, and definitely in the upper echelon in the current horror scene. Many other writers mention either loving his work and/or having the man influence their own, and for just cause. His writing suits anyone with a taste for the dark and terrifying!” –Zakk at The Eyes of Madness/The Mouth of Madness Podcast 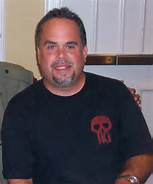 Hunter Shea is the product of a childhood weaned on The Night Stalker, The Twilight Zone and In Search Of. He doesn’t just write about the paranormal – he actively seeks out the things that scare the hell out of people and experiences them for himself.

Publishers Weekly named The Montauk Monster one of the best reads of the summer in 2014, and his follow up novel, Hell Hole, was named best horror novel of the year on several prestigious horror sites. Cemetery Dance had this to say about his apocalyptic thriller, Tortures of the Damned – “A terrifying read that left me wanting more. I absolutely devoured this book!”

He wrote his first novel with the express desire to work only with editor Don D’Auria at Dorchester (Leisure Horror). He submitted his novel to Don and only Don, unagented, placed on the slush pile. He is proof that dedicated writers can be rescued from no man’s land. He now works with Don, along with several other agents and publishers, having published over ten books in just four years.

Hunter is proud to be be one half of the Monster Men video podcast, along with his partner in crime, Jack Campisi. It is one of the most watched horror video podcasts in the world. Monster Men is a light-hearted approach to dark subjects. Hunter and Jack explore real life hauntings, monsters, movies, books and everything under the horror sun. They often interview authors, crytid and ghost hunters, directors and anyone else living in the horror lane.

Living with his wonderful family and two cats, he’s happy to be close enough to New York City to get Gray’s Papaya hot dogs when the craving hits. His daughters have also gotten the horror bug, assisting him with research, story ideas and illustrations that can be seen in magazines such as Dark Dossier.

Want to feature this book/author?

If you are a blogger, author, or member of the media and you would like to feature The Jersey Devil or Hunter Shea in a review or interview, please contact Erin Al-Mehairi, publicist, at hookofabook@hotmail.com. Thanks!