Review copy provided as part of the Consequences blog tour.

It’s the last day of high school for Christopher, Austin and a few friends. Their graduation wouldn’t be complete without a party, so a party it will be. Christopher hears his long time infatuation Hannah will be there, and what could be better? His friends want to party in at Crazy Freddy’s. A house that is the subject of countless ghost stories and a family tragedy. Christopher isn’t thrilled but this may be the last chance to party with the girl he has pined over his whole life. Christopher now has his chance and decides to talk to Hannah. He hopes they can connect before Hannah leaves for college in the fall. The funny thing is Hannah has been waiting for him to ask her out, go figure. John Quick captures the thoughts and emotions of teenage life perfectly. The tunnel vision that teens often operate in and once an idea is in their head it’s all that matters.

Everyone is having a great time until they notice the cabin is on fire. A fight has broken out between Jacob and Tyler causing a lantern to fall and start the fire. Everyone knows time is short before someone will call and report them. This place is off-limits and the cops have warned everyone, more than once. The party is officially over and it’s time to get scarce before they are arrested for arson. A great night has quickly become a nightmare and no one has noticed that a man has been watching them. The man is Freddy’s grandson, Mitchell, and he had plans for that house and now his plan is revenge.

John Quick has done an excellent job in creating one sick and scary character. This backwoods psychopath is going to teach every one a lesson. Mitchell is a man who operates in the shadows and below the radar. His mind calculating when and where he can exact his revenge. He stalks and hunts Chris and his friends one by one. Mitchell doles out his own personal form of justice in completely insane ways. The method and manner are disturbing and will be burned in my mind’s eye for some time to come. The way John Quick gets into Mitchell’s head is nearly as frightening as Mitchell is. As for Chris, Hannah and their friends, these were characters I cared about. I fell in love with them and I loved the way John Quick brought them to life. Consequences was a fantastic read and one I would definitely recommend. There isn’t anything better than reading a new author and loving every minute of his book. Knowing it’s a debut novel and that there will be more to follow is an excellent bonus. I’ll be keeping John Quick on my radar while I wait for his next thriller.

It was a summer of blood and terror…

For seven friends, graduation night was supposed to be a time to celebrate the end of their high school careers and the start of their real lives.

But when an accident while partying at the local haunted house results in tragedy, they find themselves being hunted by a maniac for whom the stakes are decidedly personal.

Thirty years ago, Crazy Freddy hung his family up with barbed wire and skinned them alive. Now, the survivors can only hope for such a kindness as they are forced to accept that for everything they do, there will be CONSEQUENCES.

“John Quick takes you inside the mind of a psycho path in this thriller. I read it in only two sittings because the pacing kept me turning the pages. Very well written, I enjoyed the dialogue very much, especially the young people being hunted by the killer. It felt believable and well developed.” –Michelle Garza, co-author of Mayan Blue 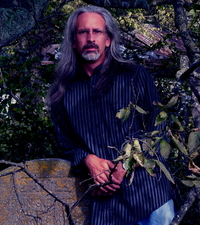 John Quick has been reading and writing scary and disturbing stuff for as long as he can remember, and has only recently begun releasing some of his creations upon the world.

His debut novel, Consequences is available now as a paperback or digital eBook. Watch for his next novel to come from Sinister Grin Press in 2017. He lives in Middle Tennessee with his wife, two kids, and three dogs that think they’re kids.

When he’s not hard at work on his next novel, you can find him online at :http://johnquickauthor.blogspot.com/ or on Facebook and Twitter.

If you would like to review Consequences or feature John with an interview or guest article for a media publication, blog, or author blurb, please e-mail Erin Al-Mehairi, publicist, at hookofabook@hotmail.com .