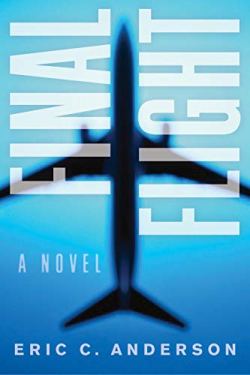 Genre: Crime Thriller
Length: 210 Pages
Publisher: Dunn Books
Release date: June 30, 2020
Synopsis: ON A CLEAR, COLD NIGHT HIGH ABOVE EAST ASIA, A CHINA AIR PASSENGER JET DISAPPEARS FROM RADAR WITH ALL ABOARD. IT’S AN ANOMALY, A FLUKE, AN UNSOLVABLE PUZZLE-AND THEN A COUPLE OF HOURS LATER, IT HAPPENS AGAIN.

Wrong. The Japanese firm supplying the gear knows the Chinese will reverse-engineer and steal it, so they’ve planted a deadly navigation bug to trigger at the first sign of theft. Jason’s just the middleman, but he finds himself trapped between yakuza gangsters, a tattooed dragon-lady sales exec, and murderous Russian mobsters looking to make a profit on the missing airplanes and passengers. If these crazies don’t start behaving like moral adults, people are going to die by the hundreds . . . and they do.

FINAL FLIGHT, the latest prescient tale from the man who brought us the “New Caliphate” trilogy and Byte, might make you think twice before boarding the next plane.

I remember this was a big news story years ago, a missing airliner is hard to forget. In a world where you can track a family members phone, its hard to swallow the fact we couldn’t find this plane. The theory presented here was interesting, inventive, and well thought out. Final Flight by Eric C. Anderson was a good read, and as I said, an interesting look at one possible outcome. One that would give any conspiracy theorist fuel for thought. The plot was multi layered and has many characters to simultaneously follow.

Unfortunately, I had a slew of issues with Final Flight. With the story set in the far east, and given the number of characters, many were difficult to pronounce, including the locations. Thus, making it hard to know who is who, and where they were at any given moment, far east geography isn’t my strong suit. The characters had overly extensive backstories. Backstories within backstories to be exact. The writing, in many places, was long-winded, taking the scenic route, and over explained, flowery. There was an odd mixture of very current, up to date, even on point phrases. At the same time, antiquated descriptions for many common words and phrases, World Wide Web, cathode ray tube tv, commode. Final Flight was entertaining enough, but it left me wanting a trimmer, learner story. Less about the characters, more about the theory Eric C Anderson explored here.

Eric C. Anderson has returned to his roots–and is plying the waters of the great Northwest as an author, motorcycle rider and long-time sailor. Prior to fleeing the East Coast, he was a general contractor who won “best of city” in Washington DC in 2015. Before resuming his career as a hammer swinger, he retired from 25 years of service within the intelligence community as a faculty member at the National Intelligence University.

During his career he produced over 600 articles for the President’s Daily Brief, National Intelligence Council, International Security Advisory Board and the Department of Defense. In addition, he is a leading scholar on the rise of sovereign wealth funds. His book, “Take the Money and Run: Sovereign Wealth Funds and the Demise of American Prosperity” published in March 2009. His focus on events in Asia is reflected in a text published in 2010, “China Restored: The Middle Kingdom Looks Forward to 2020.” He has also written on private adoption–telling his daughter’s story in “Adopting Ainsley: There’s No Place for a Car Seat on a Motorcycle”. Picking up on his Asia background, he published “Sinophobia: The Huawei Story” in 2013. He is currently working on a trilogy examining ISIS–the first book, “Osiris” will be published in August 2017–and serves as the editor for “Fractus,” a collection of essays providing an international perspective on the unwinding of liberal democracy.

Mr. Anderson has served on the CIA Red Cell, as a member of Hicks and Associates, and at the Defense Intelligence Agency as a senior intelligence analyst. In addition, he was a senior intelligence analyst for the Multi National Forces-Iraq in Baghdad and at the U.S. Pacific Command in Hawaii. From 1990-2000, Mr. Anderson was an active duty intelligence officer in the United States Air Force–with assignments in Japan, Korea and Saudi Arabia. He also taught for the University of Missouri, University of Maryland, and the Air Force Academy.

Mr. Anderson has a PhD in political science from the University of Missouri, a MA from Bowling Green State University in Ohio, and a BA from Illinois Wesleyan University. He also is graduate of the Air Command and Staff College and the Air War College. A long-time Harley rider, Mr. Anderson claims to have put over 300,000 miles on motorcycles during the last 30 years and has lost track of his time afloat aboard a variety of sailboats.