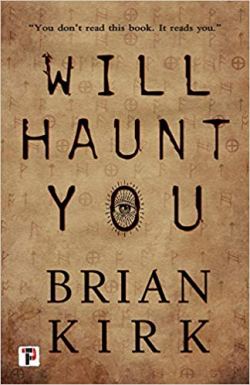 Genre: Horror
Length: 288 Pages
Publisher: FLAME TREE PRESS
Release date: March 14, 2019
Synopsis: Rumors of a deadly book have been floating around the dark corners of the deep web. A disturbing tale about a mysterious figure who preys on those who read the book and subjects them to a world of personalized terror.

Jesse Wheeler―former guitarist of the heavy metal group The Rising Dead―was quick to discount the ominous folklore associated with the book. It takes more than some urban legend to frighten him. Hell, reality is scary enough. Seven years ago his greatest responsibility was the nightly guitar solo. Then one night when Jesse was blackout drunk, he accidentally injured his son, leaving him permanently disabled. Dreams of being a rock star died when he destroyed his son’s future. Now he cuts radio jingles and fights to stay clean.

But Jesse is wrong. The legend is real―and tonight he will become the protagonist in an elaborate scheme specifically tailored to prey on his fears and resurrect the ghosts from his past. Jesse is not the only one in danger, however. By reading the book, you have volunteered to participate in the author’s deadly game, with every page drawing you closer to your own personalized nightmare. The real horror doesn’t begin until you reach the end.

That’s when the evil comes for you.

Will Haunt You had one of the creepiest, and most terrifying beginnings I can remember reading in a long time. Within the first half-dozen chapters I was filled with an overwhelming sense of terror. The journey Jesse found himself on was a nightmare straight out of the movie Inception. Each layer crazier than the one before it, and it didn’t let up for a good portion of the book.

Will Haunt You had some great passages, ‘You know how you can animate a series of drawings by flipping the pages? That was how my face was printed on the wall.’ That is a hell of a description. There were many more throughout the book. Many were like a slap to the face or a shot between the eyes. Ones that make you wonder and ones that tighten your chest. ‘We live in a psychotic world and the only way out is death’. Damn if that isn’t a harsh and brutal view. This was exactly the world Jesse was struggling to survive.

As much as I loved the horrors and thought-provoking moments, of which there were many, I more I read, the more lost I became. The story started to feel like it had gone in too many directions and posed too many questions. For those who remember the great TV show LOST, this was the vibe I was getting along with too few answers.
Will Haunt You was great read for three-quarters of the book, then I thought what the hell happened. I could feel the momentum leaking from the pages and I wasn’t thrilled with the conclusion. Something was amiss, and I couldn’t put my finger on what it was. I was left with mixed emotions and hoped for more in the end.

Link to purchase Will Haunt You

Brian Kirk lives in Atlanta with his beautiful wife and rambunctious identical twin boys. He works as a freelance writer in addition to writing fiction, and is currently working on the second book in a planned trilogy. We Are Monsters is his debut release. Feel free to connect with him online. Don’t worry, he only kills his characters.

3 thoughts on “Brian Kirk – Will Haunt You Review”