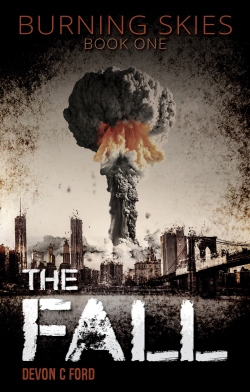 Cal’s ‘honeymoon’ didn’t start off quite how he’d planned. For starters, he was heading somewhere he didn’t actually want to go. And secondly, he was going alone and unmarried. He had no idea that his first visit to New York City would also land him in the middle of a domestic terror attack, forcing him to flee Manhattan in a desperate bid to survive.

This was no ordinary terror attack.

The Movement, in a misguided attempt to seize political control of the USA, unwittingly invited the destruction of their homeland, and as the bombs start to fall, the shock and loss of life reverberates around the world.

Cal, along with a small group he met in NYC, desperately flees inland away from the targeted coastal cities, but chaos follows them around every corner.

Vulpine Press are so excited to be releasing book 1 of our innovative multi-author series. The Fall by Devon C Ford is the first of the Burning Skies series, which will also feature bestselling authors Jacqueline Druga and P.A. Glaspy.

The Fall follows Cal as a trip to New York turns into a nightmare. He soon finds himself in the middle of a war like no other. A war where someone else is calling the shots…but no one knows who.

Ford is a UK-based author and his bestselling After it Happened series sold over 200,000 copies worldwide. Find him on Facebook @devoncfordofficial or at www.devoncford.com