Review copy provided as part of the Die Dog or Eat the Hatchet blog tour.

The first story Damn Dirty Apes sets us up with Reggie, an ex-boxer now working as a bouncer in a back woods strip club who gets more than he bargained for in Damn Dirty Apes. The stripper and her dumber than a box of rocks boyfriend are in the woods making a porno with the ex-high school mascot. As if the story isn’t crazy enough the mascot who is dressed in his Baboon costume is taken by the Skunk Ape. This is one heck of a fun story, Reggie has a hilarious attitude and gets himself in to a mess trying to help find his friend. Adam Howe has some great call backs to boxing movies, and numerous old school TV and movies. The banter is witty and this is the kind of story you can finish in one sitting and enjoy the heck out of. There is plenty going on with action, horror and a bunch of crazy characters. Simply stated this a really fun story to read with a solid ending.

In the second short, Die Dog or Eat the Hatchet, Terrence Hingle killed five sorority girls at the Kappa Pi house. Five years later he still isn’t telling anyone why he went on the murderous massacre. Officer Carrick has been waiting five long years for Terry to tell him why he killed the girls. Terry is the perfect psycho from a completely messed up past. Adam Howe lays out Terry’s past and almost makes us feel sorry for him. This is one element that makes a story great, well-crafted characters that have depth and make you feel something toward them. If I don’t care about the characters it’s hard to care what happens to them. Terry is a sick and fun guy and takes control of the situation he finds himself in, until he meets someone far more disturbed. This is story pretty sick and twisted. It hits on more points of horror than I’m usually comfortable reading. But Adam gave me a heroin I couldn’t give up on, she traveled a hellish road with Terry and managed to survive!

Gator Bait, the final story gives us Mr. Hammond who was caught with another man’s wife, a dangerous game to say the least. And this guy isn’t the sort to take that kind of thing lightly. The man pays him back by cutting off two of his fingers, fingers he badly needs for his line or work. Mr. Hammond is a piano player and now that job just became a bit more difficult. After being caught with his hand in the cookie jar he splits town and doesn’t look back. He hitches a ride to anywhere but here and finds himself at The Grinnin’ Gator. Hoping trouble is far in the rear view he tells his boss his name is Mr. Smith, and takes a job playing piano in the rundown bar. It isn’t long before he finds himself in a world of trouble. He may end up gator bait soon if he isn’t careful.

Sometimes you read a book that just hits on all cylinders, for me this book was that book. I really enjoyed the writing and the direction the stories went. The characters were fun to spend time with and the stories weren’t predictable. Adam Howe just creates his characters and lets the story go where it will. Die Dog or Eat the Hatchet was a book I almost didn’t read and damn I’m glad I did. This is a book I can easily recommend if you love horror with a wicked sense of humor. 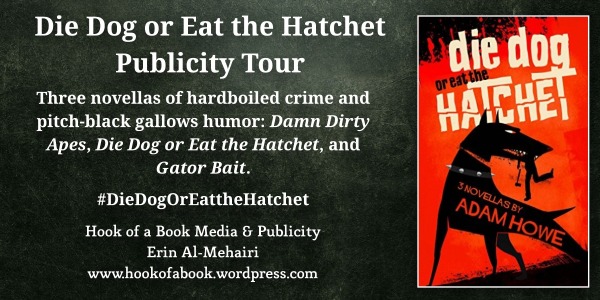 To Purchase Die Dog or Eat the Hatchet Click Here

Washed-up prizefighter Reggie Levine is eking a living as a strip club bouncer when he’s offered an unlikely shot at redemption. The Bigelow Skunk Ape – a mythical creature said to haunt the local woods – has kidnapped the high school football mascot, Boogaloo Baboon. Now it’s up to Reggie to lead a misfit posse including a plucky stripper, the town drunk, and legend-in-his-own-mind skunk ape hunter Jameson T. Salisbury. Their mission: Slay the beast and rescue their friend. But not everything is as it seems, and as our heroes venture deeper into the heart of darkness, they will discover worse things waiting in the woods than just the Bigelow Skunk Ape. The story the Society for the Preservation of the North American Skunk Ape tried to ban; Damn Dirty Apes mixes Roadhouse with Jaws with Sons of Anarchy, to create a rollicking romp of 80s-style action/adventure, creature horror and pitch-black comedy.

DIE DOG OR EAT THE HATCHET

Escaped mental patient Terrence Hingle, the butcher of five sorority sisters at the Kappa Pi Massacre, kidnaps timid diner waitress Tilly Mulvehill and bolts for the border. Forcing his hostage to drive him out of town, it’s just a question of time before Tilly becomes the next victim in Hingle’s latest killing spree. But when they stop for gas at a rural filling station operated by deranged twin brothers, Dwayne and Dwight Ritter, the tables are turned on Hingle, and for Tilly the night becomes a hellish cat-and-mouse ordeal of terror and depravity. The meat in a maniac sandwich, Tilly is forced against her nature to make a stand and fight for survival. Because sometimes the only choice you have is to do or die…to Die Dog Or Eat The Hatchet.

Prohibition-era 1930s… After an affair with the wrong man’s wife, seedy piano player Smitty Three Fingers flees the city and finds himself tinkling the ivories at a Louisiana honky-tonk owned by vicious bootlegger Horace Croker and his trophy wife, Grace. Folks come to The Grinnin’ Gator for the liquor and burlesque girls, but they keep coming back for Big George, the giant alligator Croker keeps in the pond out back. Croker is rumored to have fed ex-wives and enemies to his pet, so when Smitty and Grace embark on a torrid affair…what could possibly go wrong? Inspired by true events, Gator Bait mixes hardboiled crime (James M. Cain’s The Postman Always Rings Twice) with creature horror (Tobe Hooper’s Eaten Alive) to create a riveting tale of suspense.

Listen to this sample reading from the book over at YouTube from the folks at Manor House:

“With Die Dog Or Eat the Hatchet, Adam Howe hasn’t written one of my favorite books of the year, he’s actually written three of my favorites. Stories that are tight, toned, and genre-confounding. Horror fans and crime fans are going to come to blows over who gets to claim Howe as one of their own, but they’re both going to be wrong because Howe’s his own thing.” – Adam Cesare, author of Tribesmen and Mercy House

“The recipe for Adam Howe’s DIE DOG OR EAT THE HATCHET is: Two parts Joe Lansdale, One part Justified, and a heavy dose of WTF. The result is a swampy cocktail darker than any backwoods hayride, stronger than the meanest Sasquatch, and crazier than anything you’ll find chicken-fried at your local state fair.”—Eryk Pruitt, author of Hashtag and Dirtbags

“Adam Howe proves with the three stories in this book that he can basically write anything. And write it very well indeed. To summarise: A three novella collection that you absolutely must have in your collection. I give this one the highest possible recommendation that I can.” -Nev, Confessions of a Reviewer

“Adam Howe’s “Die Dog or Eat the Hatchet,” is equal parts terror and fun, his dark comedic voice dances through each of the works in this collection to create engaging stories filled with bars, dames, rabid dogs, and an ape with one hell of a right hook.”(Nathan Crazybear/Splatterpunk Zine)

“Once again this author has sucked me into the darkness of his stories and unleashed the twisted, disgusting and stomach churning madness that I come to expect. In fact, I would have been very disappointed if this book was not even more mind-blowing than Black Cat Mojo. And he did not disappoint. Hats off to Mr Howe for creating this magnificent novella of pure horror. I would definitely recommend this to readers of horror and make sure you buckle up as you will be in for the most twisted ride of your life!” -Crime Book Junkie

“I’m pretty certain that whatever genre you like to read, be it pulp, noir, horror, anything really, you will find something to enjoy here. It’s fast paced, action packed and brilliantly written. Comet Press has got a diamond on their hands! 5 stars” -Adrian Shotbolt

Adam Howe writes the twisted fiction your mother warned you about. A British writer of fiction and screenplays, he lives in Greater London with his partner and their hellhound, Gino. Writing as Garrett Addams, his short story Jumper was chosen by Stephen King as the winner of the On Writing contest, and published in the paperback/Kindle editions of SK’s book; he was also granted an audience with The King, where they mostly discussed slow vs. fast zombies. His fiction has appeared in Nightmare Magazine, Thuglit, The Horror Library, Mythic Delirium, Plan B Magazine, and One Buck Horror. He is the author of two collections, Black Cat Mojo and Die Dog or Eat the Hatchet, plus the eBook single, Gator Bait. Future works include Tijuana Donkey Showdown, One Tough Bastard, and a crime/horror collaboration with Adam Tribesmen Cesare.

If you would like a copy of the book for review or to conduct an interview with Adam Howe, please contact Erin Al-Mehairi, Publicist, at Hook of a Book Media: hookofabook@hotmail.com.